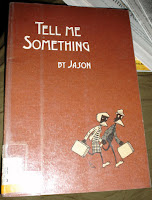 Tell Me Something by Jason
I got this as part of a group of books, many of which were discards from a public library in Las Vegas. Tell Me something is another of Jason’s temporally twisted love stories in black and white, peopled by his usual bird and dog-people. It is cute, requires a few reads to follow all of the way through and uses few words to tell the story. This copy fell in the Bad Place behind the toilet and rested there for a few clicks before my intrepid life partner fished it out. Luckily the nice plastic coated library binding kept the pages dry and free from hair monsters. 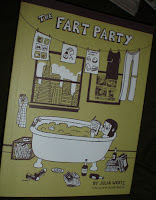 The Fart Party by Julia Wertz
After finding Wertz’s site and enjoying her daily journal comics, I looked forward to getting the hard copy of her collection, lured by the promise of new material and happy to support Atomic Books’ publishing company. I bought it from her in person at SPX while most of her attention was taken by a kiddy sketchbooker trying to get her to draw a piece. Overall, I was underwhelmed by the book, having read most of it before on her site, but I really liked the way it was printed and the paper and all. 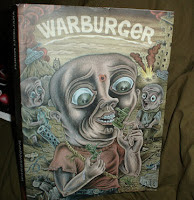 Warburger by various artists
This fat collection of war themed comics is put out by Forum Ljubljana and features contributions from cartoonists from all over the world. I really enjoyed the introduction by Alexsandar Zograf (and still somehow haven’t picked up his newest collection). Many of the strips place their focus on the US’s actions post-9/11, which makes sense as Warburger was published in 2003, the year the US invaded Iraq (again). There were a few standouts in the collection, including work by Fabian Goranson, Rocco Lombardi, Capucine Latrasse, Michal Baruch and Primaz Krasna. Though the art was very different from piece to piece, the black and white pages ran together for me. The pieces that stuck out were the ones that tackled the cyclical nature of war, how subliminal training for war is universal and how ignoring war is surprisingly easy. The ones that fell flat invoked images of Hitler and made easy linkages between sex, consumerism and war. War is a universal topic, but that doesn't mean you get to be lazy when talking about it. 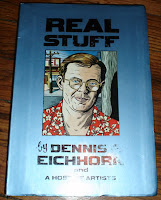 Real Stuff by Dennis Eichorn and A Host of Artists
I learn history best when I am able to work out connections between people and events on my own over a long period of time. I am talking years here, folks. Such has been my education in comics so far. One way I do this is to buy collections that look forgotten but have work by artists I am interested in. Real Stuff was one of these, a collection of Eichorn (apparently quite an autbio cartoonist and crazy man) stories illustrated by other artists, including pieces by Renee French, Mary Fleener, Ariel Bordeaux, Jason Lutes, Carol Swain and many others you probably care more about, originally published by Fantagraphics in single issues. Each story at least one of these elements: troublesome women, binge drinking, sex, drugs and fighting, and most consist of some combination of them in color and B&W. I liked seeing how each artist dealt with the similar material in their own way. I also believe that Eichorn must be fun to know, just not all that personally. Definitely worth a purchase if you can find it.

I heart everything about the Jason book--its bravery weathering the months and days in The Bad Place, its special library binding, the luggage carried by the darting characters on the cover, his single-name author credit...the orange...a true booky find!