I spent the first day of MoCCA 2011 far away from the Armory, hanging with Philly friends of various ages and descriptions. On Sunday, I arrived with A and P and we hit the floor. B showed up later and we ended up having a good MoCCA: 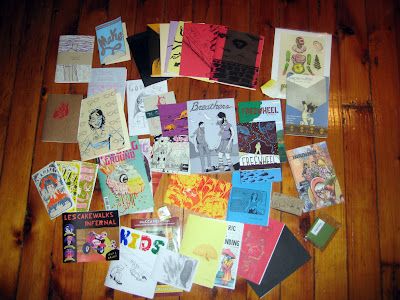 I find the armory to be a rather glum space, but it does have a few things going for it:
--a tantalizing mezzanine
--a very Age-of-Aquarius 69 motif throughout, engaging the military use of the building in a sexy swirl of counterpoint
--wooden phone booths, as modeled here by A.: 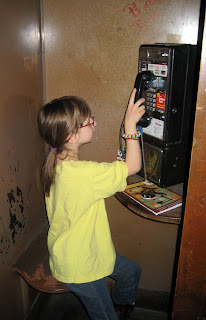 There were far fewer minis and prints than I hoped for. As stated by everyone else in the world, the price of tables is forcing many minimakers out of the fest. Since I am mainly interested in comics and art with that handmade touch this is very disappointing, but unsurprising. I noticed a ton of slicker, stupider-looking, and/or child-oriented stuff, as well as the arrival of iPads for displaying art. None of this stuff really made me want to look further; I wish I had been able to spend more time on the floor, asking around about hot books. Last year newspaper anthologies were all the rage. I didn't see as many this time around, but that could be my own blindspot. Ugly ass neon melty faces still sadly dominate the print subject matter, but I did manage to find one silkscreen that was large and lovely, by Mark Burrier (see below), that didn't look like a poorly-raised Ft. Thunder/Basil Wolverton love child. As usual, I missed a few books I was looking forward to including CCS anthologies and Finders Keepers #3.

And, now, some of the many people and things I saw and bought, spottily and unskillfully photographed by myself: 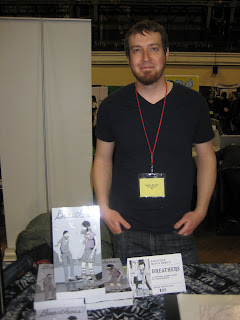 Ah MAh GAh Breathers, one of our fave minis, is a book now, Justin Madsen does not say to me 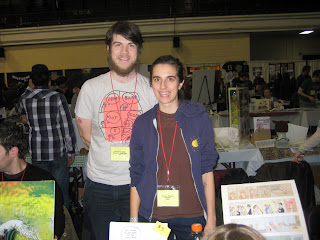 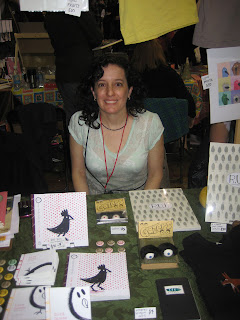 Anna Raffi is a master saleswoman 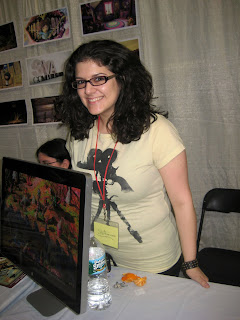 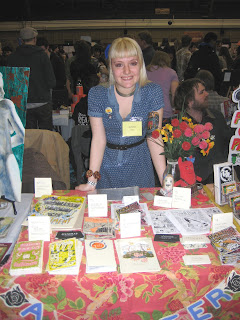 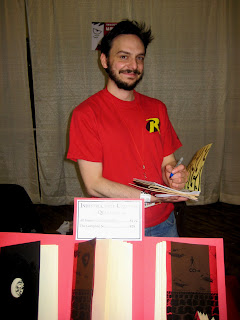 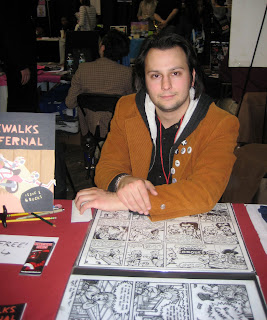 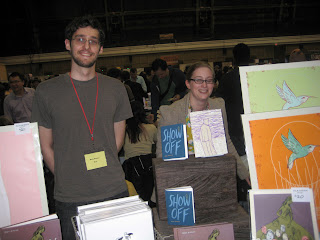 L. Nichols and Darryl Ayo are shining stars of joy

As are these portraits of B and I by L. 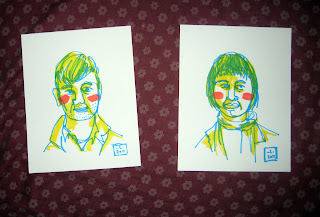 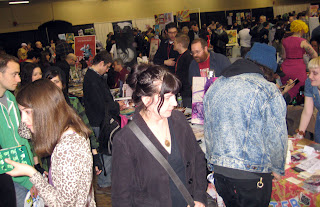 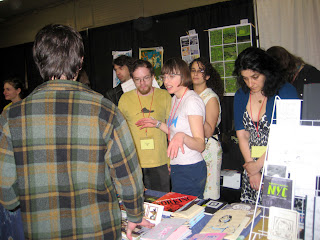 And a note about dissonance: Perhaps exhibitors would be less touchy about higher prices if the fundraising aspect of the MoCCA fest, that is supporting the museum, directly benefited the community. The museum's programming generally feels stuck in the past--perhaps a few more exhibits and events showcasing students, local, national and international self-publishers and small presses, or an artist-in-residence program, could create more goodwill in the community and at the same time increase awareness and support of the museum. As an attendee, I don't really feel like paying such a high door price to support a museum I have no interest in going to, ya dig? Next year it is quite possible that I won't. What do you think?
Posted by Carrie at 7:38 PM 5 comments:

Check out my review of Tessa Brunton's In the tall grass, issues 2-4 over at inkstuds.
Posted by Carrie at 8:33 PM 3 comments: