The Oven by Sophie Goldstein 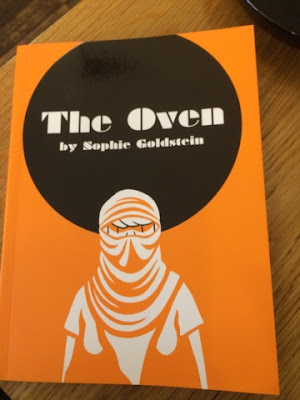 I must admit that I am a sucker for a scrappy utopia. I love hope expressed through investing in the land, having children and forming community around shared humanity. In Sophie Goldstein's The Oven, "the city" has become entirely removed from the land and in order to have children one must be deemed perfect and issued a permit.

Young 20-something main characters Syd and Eric run away from the city to have a child and, perhaps, to become adults. The Oven seems to offer a few options for that future. They begin with the exhilaration of the young and despite Syd's initial fear that they made a mistake, they are taken under the wing of a farmer couple with several children and settle into a physically strenuous life of growing their own food, sewing their own clothes and living without the UV-ray protection of a dome.

But the saying, uttered often around the camp, "It's a free country," has a dark side of course. Goldstein is sparing in showing us the full extent of life  in The Oven, but the glimpses of the less savory side of being outside the law are interesting. Especially effective are the panels showing the effects of a local drug made from bugs.

While I enjoyed The Oven, I felt as though the decline of Syd and Eric's relationship happened too quickly. I would have appreciated more scenes of them growing apart, their shared dream unraveling, so that when Eric leaves we feel more profoundly what Syd has lost and gain more insight into her final decision to stay in the colony. I also think this would have provided more opportunities to explore the world that Goldstein built.

Update: The Oven is a 2015 Ignatz nominee for Outstanding Graphic Novel.
Posted by Carrie at 9:00 AM No comments: