Check out my review of Chuck Forsman's Wolf over at inkstuds.
Posted by Carrie at 12:03 PM 2 comments:

1) I do not like reference all that much, but I love reader's advisory--obviously.

3) Butler Library at Columbia provides an intoxicating atmosphere of old money, untold secrets and intellectual vigor. No wonder all those undergrads want to hump in its stacks.

4) Poster-making is inexplicably considered a valuable thing for a graduate student to do.

5) The NYPL offers so many free services like reference chat, access to databases and old-timey eye candy that is feels like I are getting way with something every time I use their site. 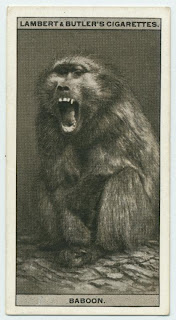 Rest assured that its ass is angry about my comment, too. Image via the NYPL, of course
Posted by Carrie at 10:06 AM 1 comment:

file under: the library

A Complicated Kindness by Miriam Toews

Reading A Complicated Kindness reminded me a lot of reading Geek Love for the first time. It is fast paced, strewn with pain and humor and told in a captivating first-person narrative that makes the form seem easy. Though not set in the freak show circuit like GL, ACK does follow life in, in the words of the 16-year-old narrator Nomi, a “secret town” of Mennonites in Canada called East Village. She spends a lot of time considering her place in the Village, and the flow of her thoughts is very true: “That I belong in the frightful fresco of this man’s dream unnerves me. I wonder exactly happened in Menno’s world that made him turn his back on it…The mark of the beast? Streets paved in gold? What? Fuck off. I dream of escaping into the real world. If I’m forced to read one more Narnia series book I’ll kill myself.” 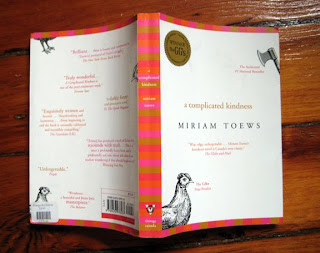 Nomi is angry, defeated, self-destructive, but mostly just sad. Both her sister and her mother have disappeared from town, leaving her with her good-hearted but befuddled father and a bad reputation. She has a plan to leave town too, like we all did at 16, and it is equally possible and fantasy. The main thing keeping her is her lovely dad, Ray, whose own depression at the loss of the other half of the family. I love the character of Ray; his unfunniness and Dadliness are dead-on renderings by Toews and his treatment shows the depth of her understanding of the heartbreak of living in both a faith bound society and in the world, the real world as Nomi would have it, at once when all you want to do is be a good person and have a good life.

The specter of excommunication, a concept that seems especially cruel to me, hovers over this story, and that is especially sinister since Nomi’s frothing uncle is the town’s religious head. As we learn more about the family’s history we can decide to see Uncle Hans as a damaged individual with a poor choice of coping mechanisms or just a complete asshole, or both. Hans shows well the unfortunate arc a life can take when a person chooses to transform an incidence of pain into a grudge against the world and how potent and scary that transformation can be in a religious context.

Women in East Village have it noticeably worse than the men and Toews engages this subtly. The fine line between being a child and being an adult is especially perilous in East Village, and I like that Toews exploits this by having Nomi left by her mysterious, vibrant mom at age thirteen (still a kid) and telling this angry, revelatory story as an outraged teen, near the age when her outrageous sister took off. Other women who can’t or won’t leave go sick like Nomi’s religious best friend, get drunk like her grandma or just go dead like her aunt, extreme reflections of the options available to women everywhere who can’t conform but can’t leave.

All this sounds depressing, but A Complicated Kindness is funny and vibrant too. Though she feels stuck, you know that something is happening with Nomi. All that teenage energy comes busting through the pages, and it is an inspiration and a warning at once.
Posted by Carrie at 8:56 PM 5 comments:


The roof is actually even more potty than this now that I've begin to thin and repot seedlings. Besides the vegetables you see here I am growing some sunflowers for B, and some zinnias for me. Between the two is nasturtium; I have several pots of those grown from seed. Will they actually flower? 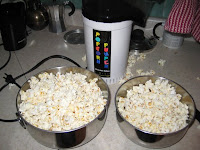 It shoots popcorn! It jazzes up the counter with its wild lettering! It only smells a little like burning wires! Bonus: giving it to me makes my parents seem less like hoarders.

&&&
This week was a bad one for stress, but a good one for art. My friend Pete not only brought his bad self to visit, he brought a housewarming painting with him: 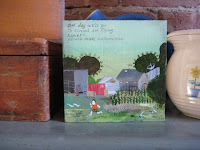 One Day by Esther Pearl Watson
I keep going back and looking at it over and over. Especially the little socks.

&&&
More art arrived with Eva today. I commissioned a set of portraits for B's birthday awhile ago from Simon, and she graciously lugged them from Vienna to Brooklyn. They look so much like us that I had to redact!

I thought that we'd put them in the bathroom so guests feel safe knowing that we are always watching.
Posted by Carrie at 11:19 PM 3 comments: