Cast In Doubt by Lynne Tillman

Right now I am reading Absence Makes the Heart, a short story collection by Lynne Tillman. It’s really great so far and brings into perspective what I find compelling about Tillman’s work: She crawls inside of fictional people and seems to channel her first person characters. You forget that you are reading the work of an author. The main characters of the books I’ve read so far are experts of some kind, which shapes the kind of self-talk done by the characters.

In Cast In Doubt the protagonist is a seventy-something American expat named Horace living in a small town in Greece. He becomes obsessed with a young American woman, Ruth, who rents a rotting house across from him. He ruminates on his interactions with her, obsessed with his obsession, weaving in and out of memories of his past and observations of his present. He is also writing a book about his ancestors that is just not getting done, whereas ideas for his moneymaking project, a detective series, just keep popping up. I like Horace best when he is being catty about others in clever ways, just like a good elder-gay should.

Horace’s voice is strong and his history is rock solid—when he laments the repressed yet sexually charged forties you do too, even if it is with a little eye roll for the psychic indulgences of a privileged old man. And when the story gets turned about a bit there is shock and questions. Mostly Cast In Doubt made me want to drink gallons of the cold white wine so sensually described by Horace.

I liked the book, but feel a tepidness towards it, most likely because I cared less for Horace than I did for American Genius’s skin-obsessed inmate.

*No picture because I returned this ages ago. No library jail for me!
Posted by Carrie at 4:12 PM No comments:

file under: noodlin', other blogs

What if a story about a Victorian lady dropped all that does-he-love-her jibber jabber and took our rulebound heroine from walking her grounds, recreating her own childhood, to her children (“They had sloping shoulders, both of them.”) and their blistering, raving deaths from small pox to gay Paris, literally and matter-of-factly.Well, then that book would be this: 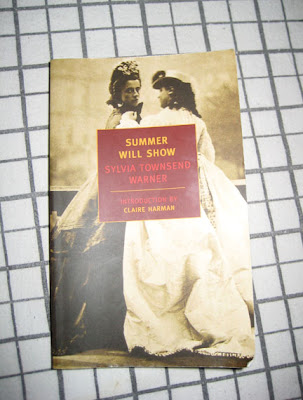 Precisely written and a bit autobiographical (according to the introduction by Warner’s biographer Claire Harman), Summer Will Show is a political novel, a love story and actually quite funny. The main character, Sophia Willoughby, after finding out that her decorative but none too useful husband Frederick has hooked up with a wild woman in Paris, must then decide how she is going to live the rest of her life. Will she take to books or embroidery or maybe hump around a bit herself? In the end she decides to go to France to confront Frederick and ends up in the infuriating situation of having to reconcile with someone much less interesting than Minna, the woman he left her for.

So, Sophia falls in love.

Some of the Parisian parts drag a bit with Sophia’s observations of Minna’s revolution-obsessed life, but it is well worth the trip. Between this and the even more fun Lolly Willows, I can’t wait to read some more Warner.

An aside: Though it was written well after Queen Victoria left the throne, there are some exoticizing/straight-up racist thoughts thunk by Sophia about Minna and others are interesting with respect to how bigotry sounds today.
Posted by Carrie at 9:54 AM No comments:

Some things I did today:

1) Wrote about leggings and big rigs
2) Had several dreams about phone calls that never happened
3) Saw this: 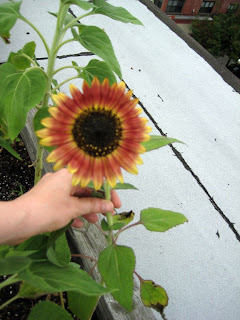 Several banal thoughts led me to this exciting conclusion: I miss interviewing people. Here on try harder, I've only managed three interviews over the years and that is a double order of stupid.

file under: tell me something good

This is what summer feels like. Hot, sticky, a little raw, the stories in Wide Eyed, are first person West Coast tales—20-something wandering lit with rocknroll and a little bit of magic thrown in. The cover, by Dalton as well, tells you something about the inside: 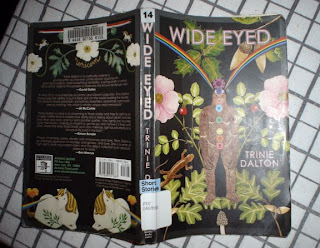 If you read these stories all in a row, you might feel like you are experiencing several late nights in the same woman’s life: the boyfriend is always named Matt, animals are always important and L.A. is where it’s at or where it’s been. The woman is searching for a remedy for the things that aren’t right: In ‘Hummingbird Moonshine’ it’s a series of physical hurts, in ‘The Tide of My Mounting Sympathy’ it’s a lurking mentally ill sort-of friend. Even the structure of some stories recall list making or the organizing power of prayer by presenting thoughts on a top in several numbered parts. ‘Faces’ is the best of these; most of the others, though enjoyable, feel underdone.

My favorite story, ‘Animal Story,’ contains several talismans against loneliness. The main character is out in the desert, alone, her cat having been eaten by a coyote, and she is deciding how and when to rejoining society. In the meantime, she hosts parties for spiders and ants and plays Nintendo:

“Playing Burgertime gives you this false sense of staying busy, as if you are personally responsible for delivering meat to mankind. Staving off starvation of the masses is an overwhelming task that requires total dedication. Catching the stuff on the bun takes on religious significance, as if it’s manna flowing from heaven. Don’t fuck up and drop the lettuce crooked on the burger or it will drift off the cliff beside you. As you read this you think, Who cares about Burgertime? But when you are awake all night because it’s too quiet and there’s no cat the wiggle your foot on, your deluded brain mistakes the Chef’s duties for your own. You’ll be making burgers all night sometime—just watch.”

Most of these stories are sneaky like that. Yes, Marc Bolan, Freddy Krueger and unicorns make appearances, but Dalton doesn’t use them as emotional shortcuts. Many of the stories include dreams and memories, who better to guide us through than the figures that create and inhabit those spaces?
Posted by Carrie at 10:01 AM 4 comments: