Thanks to my meeting (finally) with internet friend Anzacmonster, I got to see more of Boston than the inside of my inlaws' home. She not only met up with me at a tea shop, but, once discovering that I am not a murderer, drove me to two additional shops to satisfy my book needs. 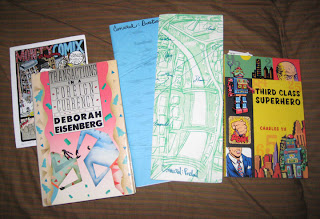 We started at The Million Year Picnic in Harvard Square.  Descending into this subterranean shop gave me the kind of thrill that I used to get hitting up Wooden Shoe Books on 20th St. in Philly as a young teenager. Maybe it was just the smell, but ol' AM and I spent a good half hour there checking out the minis, zines and indie books and we chatted about likes & loves from comictown. I picked up two Connected zines by Roger Whiting from 2002(!) and the third issue of Monty Comics by Kayla Escobedo.

We then moved on to Lorem Ipsum, the bookstore that now houses the Papercut Zine Library, sadly closed on the night of our visit. The place is big and airy, with a nice little children's section. I bet events there are super fun, but the book selection needs some perking up. I get the feeling that this is a newish store and will likely get better as more people know about it and bring them their books.

After talk of forgotten peanuts, tasty sandwiches and bored cops, Anzacmonster dropped me at Rodney's, a giant bookstore near The Middle East, and went home. Rodney's seems like a great place to wander with friends, check out nonfiction and buy either some bookshelves or some candy. The fiction section was large, but skewed towards older popular fiction. The short story collection section was a little more lively. I found the amazingly (and awesomely) 80s' Transactions in a Foreign Currency by Deborah Eisenberg and Third Class Superhero by Charles Yu. I haven't touched TCS yet, but I imagine it will be filled with fun stories that I will immediately forget. We shall see...

So the moral of this story is, if you have to go to Boston, meet up with a booky internet friend and force her to drive you from bookstore to bookstore until she has to go home.

What places did we miss?

Remember this old jpeg? Remember when it meant there was a contest happening? What fun.

Guess what? It means the same thing right now! So, here is the prompt, fresh from the search keywords used to find this very site:

As always, any bloggable form is acceptable: short stories, photos, comics, songs, etc. Email me your entries. The winning entry will be published here, and you will win a box of amazing from tryharderland. 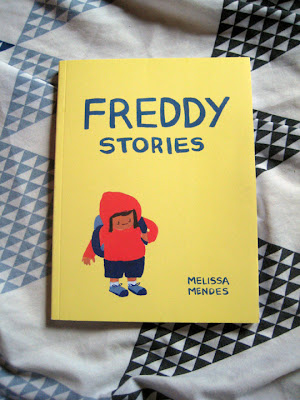 On a recent late night I saw a Melissa Mendes tweet that said “I remember those days.” She wasn’t talking about her new book of comics, Freddy Stories, but those four words are a good introduction to her work as any. Freddy Stories is a collection of quiet, subtly chronological moments in a girl’s life told with minimal dialogue that makes the reader slow down into kid-time for the duration of each story.

It is that sense of time in Freddy Stories that really sets it apart from other kid stories that I’ve read recently. Instead of nostalgic, they are without that boring, overwrought adult wistfulness; Freddy’s days are long and full of small things, anti-adventures really, that nevertheless feel like complete narratives. Most of the pages are six panels and Mendes stretches moments across them. In stories like “Mom” and “Frank,” both one-pagers, show panels that repeat with very little change, making the small changes count and giving us time with each character, Freddy and Frank respectively, and teaching us something about them. Both are wordless too, which highlights another of Mendes’ time-twisting tools. By being sparing with the dialogue, Mendes creates a sense for the reader of being inside Freddy’s head and experiencing things along with her, things like divorce, making potions and winning at pinball. 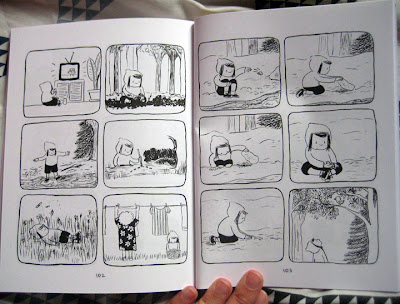 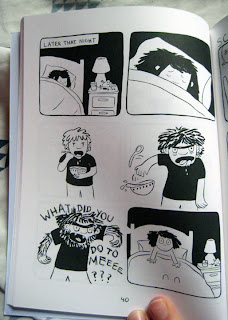 Freddy is really the cutest thing in a hoodie. Just look at that cover image! Even if your ovaries aren't bursting, Freddy is charming because even though she craves comfort and fun like the rest of us, she knows when yelling is the best policy. Peanuts fans will find a lot to love in Mendes’ characterization, as well a hint of Schulziness when the Freddy and her buddy Steven are funning around in profile. I really like it when we get to see her imagination run wild, like in the brother/werewolf page (left), just because it’s not only funny, but it shows one of the essential differences between adults and kids. We know werewolves don't come from eating a mud and dogshit potion, but what if it did? What if it did and your teenage brother ate it and got even hairier and angrier? WHAT IF IT WERE ALL YOUR FAULT????? (It will better in the morning.) See, I just sent you back in time. Neat, huh? 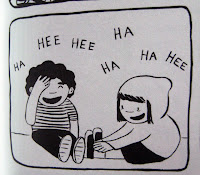 Being a kid is weird and serious business and Freddy Stories is both a great reminder of that and a call to pay attentions, play harder and yell when necessary.

As always, click to big up all the pics.

I'm stuck in the land of tiny bits with huge universes attached to them. Not only does this mean paper scraps, phrases pulled out of conversations, garlic, raw & cooked, it means short stories.

Start stopping through Black Glass by Karen Joy Fowler makes me go back to What I Didn't See (buy this book) and the two are making me want to try more stories. There is something invigorating about how the reader can feel the harnessed anger and sadness thrumming underneath the stories. My favorite thing about her stories are that they never go where I think that they are going. Surprise is the really the nicest treat. 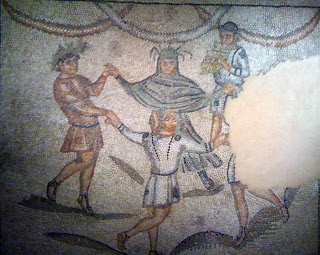 The seasons are truly screwing with me. How about you?

This is an excellent essay about the Penn State child abuse conspiracy and the seemingly incomprehensible reaction of students to the firing of Joe Paterno by Brian Spears. My only complaint is that it is too short.

An awesome comic about depression, rendered in Paint, by the hi-lar Allie Brosh.


Fuck. The. Fucking. Beaches. A Tessa Brunton comic about chronic illness and the bullshit of being "positive" when life is awful.

And for something a bit lighter, here's a story about ghostbusting college kids in Malaysia over at PodCastle by Zen Cho, which shows how a great reading can change a story for the better. Reading by Tracey Yuen.

Reading House of Fear & Tales from Down Below by Leonora Carrington 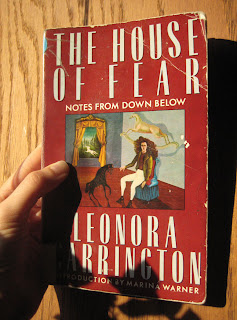 This book, as I've mentioned before, seems to be the only borrowable copy of Leonora Carrington's fiction in the five boroughs that is not the delightful The Hearing Trumpet. The collection is made up of several short stories and a memoir of her time in a Spanish asylum in the 1940s. The memoir section, dictated in French, three years after her incarceration, is called Down Below or Notes from Down Below. Let me say here that there is no question that Carrington suffered from mental illness. Reading Notes from Down Below reminded me of a lost summer I spent in the company of someone going into a manic phase and how that could have easily slid into psychosis. Even though I have no connection to the mystical and religious figures that populate her delusions, it's the kind of reading that gives me a growing sense of dread because it makes me feel a little crazy too.

Besides that effect, and despite the actual illness that it depicts, this memoir also gives a good picture of what it was (is) like to be a creative person, to create towards sanity, in a uncreative world. This quote breaks my heart with truth: "I gave little thought to the effect my experiments might have on the humans by whom I was surrounded, and, in the end, they won."

To the left is a map, a drawing made of the boundaries of Carrington's prison. It shows how hard she was trying to make a story out of the terrible things happening to her. It freaks me out with its details--the same reality as the clandestine cigarettes and paralyzing injections, but not the same at all.

How others view her sanity or insanity is totally informed by her femaleness, and this comes through in how she is treated and mistreated. Everybody just wants her to be quiet, maybe get better, maybe not. I wish I had some more quotes for this, but the library police were breathing down my neck... The second section of the memoir, all about the time shortly after the institution, is shocking in its clarity about the concessions one has to make for safety in wartime and how shitty it is to have a family that cares more about propriety than your health and happiness. There is much more to say about Notes from Down Below—it demands a reread some time when I can think about it more.

###
The stories in the collection were not as interesting to me as the memoir. They play with dimensions and time, as surrealist fiction does, and nothing is as it appears. Horses appear over and over. Everything has many adjectives odd attached to it, but all come off as flat and juvenile. I wish I could get at more of her later fiction. Why must I to be constantly thwarted by my monolingualism?
Posted by Carrie at 8:42 PM No comments: