Due to everything else you read about on this blog,  I was really thinking of skipping MoCCA this year. I did skip Saturday--a very good idea considering how much life stuff I got done.

On Friday I hit up the hic + hoc party here in my neighborhood. I thrust B at Matt Moses and got the hard sell on Tumblr from Alabaster. I picked up the Unknown Origins & Untimely Ends: A Collection of Unsolved Mysteries anthology, edited by Emi Gennis, and then sat at the bar trying to tell B who people were in an unintelligible undertone.

On Sunday I put on my walking shoes, grabbed my camera and made my way to Murray Hill. The entry was still $15 for the day and still too expensive. The $5 for the show's brochure was laughable. I busted a chuckle when the poor MoCCA volunteer let me in on that great deal!

After I completely lost my shit over the OMG CURTAINS, like any sane person would, I noticed that the armory was not too crowded. I tend to list like a sinking ship when I am in crowds so this airiness allowed me to bump into many fewer people than normal. I didn't hear a ton of bitching about it being a "bad MoCCA" or anything; many books sold out before my eyes from big publishers and one-man-bands alike. Since cartoonists love to bitch, I am going to take this as a good sign.

As usual, I missed all panels. Sadly, good intentions rarely trump oversleeping and general reluctance to force a smile. One of these days! Was that even worth saying? Well, no, not really, but I already typed it and this needs to get out before next year's MoCCA.

The back of the space was set up as a mini-gallery of the Society's collection (formerly the Museum of Cartoon and Comic Art's holdings?). I loved the interaction between old newspaper work and new stuff. I was psyched as usual to see Eleanor Davis's work, originals from In Our Eden. Some other standouts for me were Nora Krug, Adam McCauley, Miriam Katin (who Robin interviewed at inkstuds recently) and Natalya Balnova, whose work reminded me of Wendy MacNaughton's illustration.

The schools were out in full force. There was a ton of amazing student work available from usual suspects SVA and CCS as well as some surprises, like Kutztown University.  I was especially intrigued by SAW's table. They ran out of the awesome-looking student anthology, but I did pick up a 3-part mini by visiting instructor Ron Rege because I was told it was about grief.

And now on to the only part that anyone cares about: The pictures! Help me fill in the blanks.

The Hearing Trumpet by Leonora Carrington is a celebration of unstereotypical womanhood, the freedom of aging and the power of friendship. I reviewed it here. I loved it, loved the experience of sharing it, loved the avenues of research it led me down. I especially loved Carmella, the narrator's best friend, and her easy relationship. I never realized that, while the narrator was the author's projection of herself as an impossibly old woman, Carmella had a real-life counterpart as well: artist Remedios Varo.

The women were both artists. They were both muses to cranky Surrealists. They both ran from the war and ended up exiled in Mexico. They were both held against their will--Carrington in a mental institution, Varo by the French police. They both had spectacular, hard lives, and probably found some comfort in the partial reflection of that reality in one another.

I learned about Varo in the great essay, How To Be Old: Two Women, Their Husbands, Their Cats, Their Alchemy, by Carrie Frye over at The Awl.* The essay focuses on the biography of the two women, how they intersect and how their friendship appears in each's writing, mostly The Hearing Trumpet. I called Carrington's language in that book "precise [and] pulsing;" Frye calls it "a kind of glissading bumptious kangaroo splendor." That assessment endeared her to me, along with her assertion that the writing in The Hearing Trumpet seems to impart the desire to make people happy, instead of to impress them.

All of this is to say that I want to read more of Varo's writing and see more of her amazing art. You should read this essay and follow what it makes you want to do.

*(But why is the title of the page "A History of Cat-Loving Women?" That is the worst.)
Posted by Carrie at 9:00 AM 2 comments: 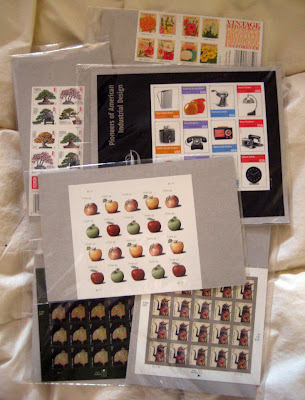 Eye of Horus by Alabaster 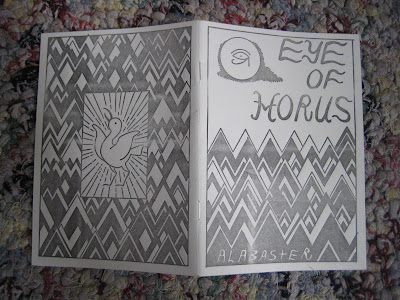 Oh to be an ibis in the grass in Alabaster’s Egypto-trip through dysfunctional family dynamics! A primer of sorts on the god Horus’ origins and exploits, this comic follows the titular god as a child. He hangs with his companion cat, Bast, heals hurt birds, dodges his murderous uncle and learns the secrets of his lineage.

Originally printed in two parts for the Portuguese magazine Lodaçal Comics, this version is a limited edition of 75. The lovely letterpress cover shows Alabaster’s usual attention to craft; I especially like the triumphant ibis on the reverse. The black and white, copier paper, interior mixes traditional comics panel structure with full-page tableaux that echo the frozen depictions of ancient Egyptian gods but somehow keep them fluid. It is in these panels that you can best see Alabaster’s commitment to the decorative detail.

I was a bit surprised that she didn’t wring more bitter humor out of the terror and misery of young Horus, as the suffering of child-like characters is central to her Talamaroo stories. (See my review of those here.) We don’t get to know too much about the boy, except that he is a nice, sheltered kid with sweet bangs and big battles ahead of him. The meatiest character in here is the evil Seth—I could practically smell the stink coming off of him; but then fleshing out personalities is perhaps the trickiest part of retelling ancient tales. Despite the small deficit in personality-based tension, there is still plenty of blood, sweat and eyeliner-stained tears in this story to keep me hoping for a next chapter some time soon.
Posted by Carrie at 1:24 PM No comments:

"Attached to the box was a label that said: "Do not open until war is over." Which war? The Civil War? The War of 1812? What he discovered was a box filled with disguised anti-Nazi tracts hidden in packets of tea and shampoo and concealed in miniature books both popular and scholarly."
I always forget about the NYPL's blogs and then there they are, pointing me to amazing object, books or trains of thought and inspiring great ideas.

New plants are patented each week. Who knew? Here are some color pictures of them.
Additionally, prison libraries are covered more than I expected in a few of the blogs.
Also, a bunch of pictures of Christopher Walken!

I really enjoyed this essay on book reviews, the desire to hurt/ignore/erase any "girl who fucks" and this: "I don’t want to write about rape anymore. But here we are." Trigger Warning by Sarah McCarry
Posted by Carrie at 9:16 PM No comments: