I've got a new review over at inkstuds: Liz Baillie's Freewheel: Chapter One.
Posted by Carrie at 8:43 PM 4 comments:

Ignatz award winner and CCS graduate Chuck McBuck generously took some time out of his busy schedule to talk with me about being a cartoonist.

C: How old are you and where do you live?
C: I just turned 26 in September and I live in White River Junction, VT.

C: Where'd "Mc Buck" come from? Do you ever regret choosing it as your pen name?
C: Oh gosh. The name. The Story as I remember is that, in high school, I signed a drawing that I did in art class with that name because I thought it sounded funny. Anyway, it got put up in one of those display cases they have in the hallways and my friends saw it and started calling me by McBuck. It's such a silly thing to have stuck with me for so long. I guess I do use it though, so I am sure to blame for its continued existence. I never really thought of it as a pen name but I guess I have signed a lot of stuff with it. Just for the record I like my real name just fine and am not ashamed of it in anyway. Even though the name makes my eyes roll sometimes I don't regret it because I think people tend to remember it more than they would my real name.

C: How's Snake Oil 3 coming along? How sick are you of that question?
C: Oh it's coming along. I'm a little sick of it but not from people asking me. I find it awesome that people want to read the next one. I am more sick asking myself that question. Not to make excuses but I expect my life to get a little less busy after I graduated in the spring but it seemed that the opposite has happened. Anyway, I'm drawing it. It's moving right along all of a sudden. It is on track for December. I'm really excited about it!

C: Do you have the plot line already sketched out in your mind? How important is plot to you in your own work?
C: So with this book, I find that every time I start thinking ahead planning it out, I end up throwing those pages away. For some reason I have to do this book with the idea that I don't know what's happening next. Just a couple pages at a time. It started as just an exercise just to get myself producing work because I was in a rut at the time. I realize that this may sound disappointing to some but I honestly believe that it's what makes Snake Oil what it is. Plot is important to me but I guess I work in a more feeling my way through the dark then actually mapping out a plot and thinking when the tension needs to go up or where the climax is. I studied a lot of that stuff at school and I think it sunk in but for whatever reason I can't think about that stuff too much as I am drawing. I am working on another book (another reason Snake Oil 3 isn't done) right now that I actually wrote out and did a big draft of. So the way I do Snake Oil isn't the only way I work I guess. Boy I hope that answered those questions.


C: Another book, eh? Is there anything you can tell me about that?
C: Yes, This summer I did a draft of a story that I didn't expect to happen. I sat down to do a small story for another project and the thing just got out of hand so I went with it and ended up with a draft around 80-90 pages. I am really excited about. I'm not sure what form it will take when it's done. I don't to talk about the story because it's still very fragile. It's not ready to be talked about yet. Too much could change.

C: I know you chose to stay in White River Junction after graduating from CCS. How has that decision affected your work?
C: Staying in Vermont was the best idea ever. The whole time I was in school I was dreaming about where to go after I graduated. Should I move to New York? Should I go back to LA? Should I go back to Pennsylvania? And eventually I realized that going to a place like New York, I would just be trying to recreate what I already had in Vermont: an amazing community of artists and friends. Oh, and it's a lot cheaper. CCS also sweetened the deal by starting up what they are calling the CCS Inkubator. It's still in its infancy but right now it's basically providing a studio space for alumni to work. There are other plans for it though. AAAAAAAAAnd getting to your actual question. The only way it has affected my work is that I am supporting myself now so I am working a lot more. It's slowed my output considerably. I was just thinking today how fast I did Snake Oil 1 and 2. It was crazy. But I was under the pressure of the end of the school year then. 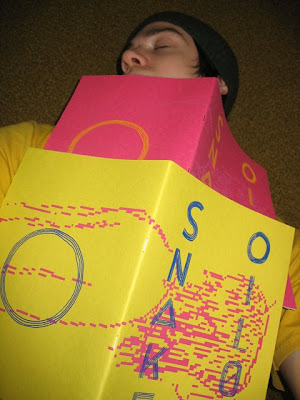 C: Snake Oil really showcases your ability to create and maintain a tense atmosphere. I first encountered this in your work when I read Drunks. Alcoholism is a well-plumbed depth; what made you want to make that book in the way you did?
C: I was pretty proud of at the time. Alcoholism is something that seems to keep popping up in my life. Well, not just my life but everywhere. It's something that stirs a lot of emotion up in me. I really wanted to try to do a "serious" story at the time and it was my way of exploring my feelings on drunks and me experimenting with writing. I'm really glad I did the book because it was a great stepping-stone for me. I learned a lot about my abilities from doing it.

C: Have you thought about returning to Drunks? For some reason I thought it might end up being a series.
C: You are right about it being a series. My plan was to do 3 books, each showcasing a different type of alcoholic. I probably won't end of ever doing the other two unless I go back and redraw all of the first one. I was really struggling with figuring out how I draw when I made Drunks and to me, it looks like it was drawn with a different hand.

C: What themes would you like to tackle in your work in the future?
C: As far as themes go, I really don't consciously think about them much. I know they are there in everything I do. But I usually don't recognize it until after the fact. I discovered that I prefer to be more spontaneous when writing comics. It hard for me to sit down and say, Ok, I am going to write this kind of story and this is how it's going to start and end. I really enjoy the act of writing in comics. It's the most pleasurable part for me. Snake Oil is really the ultimate tribute to this part of me because I am literally writing it right there on the page. 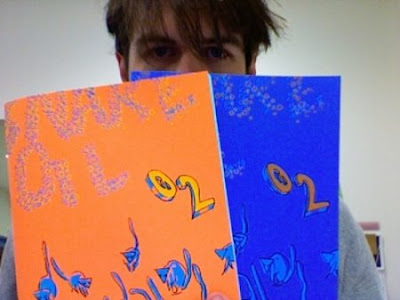 C: What’s your day job?
C: I work for the CCS Schulz Library and I work in the deli at the Co-op food store here in White River. I love both of my jobs. I'm glad neither of them involves drawing.

C: Charles Schultz Library, huh? Sounds awesome. What do you do there and how could it not affect your work?
C: Well, I guess I am the librarian there. I feel sort of like I am not qualified to call myself that but I guess that's my job title. I pretty much run the place 6 days a week with much guidance from Robyn Chapman. There is a lot of processing of book donations and re-shelving and organizing and figuring out where all these books are going to go. The school is blessed with a lot of donations and we have a pretty amazing collection. I guess it's a pretty unique library since the majority of it is comics. I think we have around 6000 books or so and we have cataloged most if on librarything.org which anyone can look at and search through our collection. Our name on there is cartoonstudies in case anyone is interested in seeing the books we have. It's really one of the best jobs ever. I am surrounded by an amazing room full of comics and I get to recommend books to students and help them find what they are looking for. It's the best parts of retail without the selling and angry customers.

Even with no hot water, I managed to make it through the GRE today. I did better than I thought, causing my father to unleash a sports metaphor on me, nearly causing me to fall down flat in front of the Port Authority.

Any suggestions on rocking grad school applications would be greatly appreciated.
Posted by Carrie at 4:16 PM 6 comments: 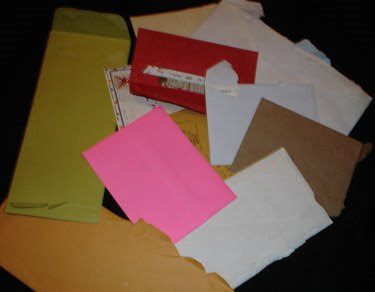 I've been thinking about writing letters again. My thoughts tend to turn toward quiet days and focused storytelling when I don't have any time. So instead, I'll wait until next month. You know, you guys can always drop me a line if you have the time. Here's some things to check out in the meantime.
***
Here's an excellent story about letters that you can enjoy while your hands and eyes do something else:
Fourteen Experiments In Postal Delivery by By John Schoffstall
***
Here's a nifty site that Amanda Well-Tailored let me on to:
Letter Writer Alliance
It's filled with ideas, news and interesting stories about the practice of letter writing. Wow, that sounds really boring. I promise that it isn't.
***
The next letter I am going to write is to a summer-friend from a few years ago. She made a zine that touched on a few questions I thought about over the years- about phases of friendship, foul weather buds and whether there is ever a right time for anything. I wonder if she will remember my face.
Posted by Carrie at 8:44 PM 7 comments:

file under: noodlin', process, the past

Hey all, I have a new review over at inkstuds, Milk Teeth by Kate Allen.
Posted by Carrie at 12:11 AM 4 comments: