Just checking in to tell you that things will be quiet here until the end of the week. It is the ass-end of the semester and showing it.
Posted by Carrie at 12:51 AM 2 comments:

I've also been trying to disappear a little, perhaps in response to October's frantic socializing. Night before last I finished Nine Ways to Disappear and I think I picked up some tips.

The Bright Side Project gives away small business art treats everyday for the price of a well-written comment. Much of the stuff is a tad girly-nesty for me, but I am a fan of all the stationery picks.

A longtime friend and I have recently started a snail mail volley that keeps me excited about opening my mailbox each day. It kind of reminds me of senior year of high school, when most of my friends were already away at college and kept me informed through breathy letters at least once a week. It was wonderful at a time when so much wasn't.

Over at Viva Snail Mail!, paper correspondence is product, muse and news. I wish she would update more.
Posted by Carrie at 2:59 PM 2 comments:

file under: comics, lilli carre, mail, other blogs, pretzels, the past

Logogryph: A Bibliography of Imaginary Books by Thomas Wharton

On a whim I picked up this small, beautiful book from Gaspereau Press at the library. Besides the obvious care that went into making the book, and the idea that this is a book about books unwritten was very appealing to me. I expected something like A Perfect Vacuum by Stanislaw Lem, which is a book of reviews of books that were never written (I need to reread this), but instead, Wharton’s approach to “imaginary” books explicitly includes imaginary worlds as well.

Malevolent books figure heavily in the collection. From three different stories:
“The novel swallows all that down without thanks and demands more.”
“It jumps and thumps on your bedside table after you’ve turned out the lights…” “Doggedly you read on, but eventually this novel that is not a novel loses you in turn…”
Unfortunately these stories all blur in to one featureless glob of nothing special and the few that contain more than cute turns of phrase get lost in the shuffle.
Stories of readers and societies driven mad by their literary activities are also favorite topics, as are the occasional description of the literary lives of fictional cultures, which I really enjoyed. Wharton is at his best when he allows characters to dominate: the stars of Atlantean literary history, the European monk being seduced in Mexico and the Canadian family poisoned with unfulfilled hopes. The last are the most human in the collection, and when I discovered that they were going to be a reoccurring subject I kept hoping that the next story I read would be about them. In these stories his writing is lush and beautiful, and his masterful setting and characterization appear effortless.

I don’t expect flash fiction to deliver any of the digressive delights that novels can. I do expect the form to take an idea, use powerful language to lodge it in my brain and leave me wanting to fill in the blanks. Instead I got a little bored. The bloodless, repetitive stories with book-as-_____ seem to be there to create a world for the titular mythical beast to saunter through, but instead leave big, blank spaces on the map.
Posted by Carrie at 3:13 AM 2 comments:

Shelley Jackson is reading and answering questions at Pratt at noon on Friday.
You'll be there, I assume.

Here is some of my writing about Jackson's work. The short version--I love her.
Posted by Carrie at 11:35 PM 3 comments:

Oh and I just wanted to let you know that everyone, previous winners included, are allowed to enter the newest contest.

Look what came in the mail today: 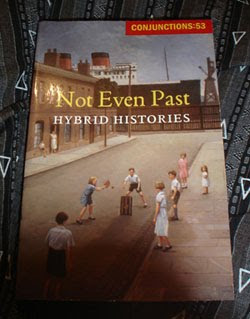 "Hybrid Histories" is a topic I've been thinking about a lot recently so I am excited about this.

While Sunday can be a communication wasteland, opening the box on the first day of the work week is an act of anticipation for me. I wrote a letter to an old friend today and I hope that he gets a nice surprise from it, thought the contents are perhaps not as delightful as the method of delivery.

I renewed my PO Box for another year. Hint, hint.
Posted by Carrie at 3:43 PM 3 comments:

Check out my review of Grant Reynolds' Comic Diorama over at the 'studs.
Posted by Carrie at 11:52 PM 1 comment:

I'd need a spin doctor with super strength to transform these poll results into something significant, but it did provide a nice glimpse into how eight or nine of you respond to what I write.

The fact that 77%, (7/9), of respondents have bought something based on one of my reviews was really cool. See advertisers, tryharderlanders are itching to spend money on your literary goods! Barring the possibility that I have some readers that hate me so much that they buy everything that I pan, this percentage shows me that that you guys trust my opinion--the holy grail for a needy blogger. After this mind-bender of a question fatigue set in for one poll taker, so the other two questions have a smaller pool of answers, but no less interesting results.

Happily, I could rouse 62% (5/8) of you from your filthy futons to visit a comic or book store based on my recommendation. I hope you found what you were looking for. As a person who finds it very difficult to leave the house sometimes I'm glad I can inspire somebody to brave breathing the same air as other humans.

I am a little surprised that so few of respondents, 25% (2/8), have ever checked a book out of the library based on on of my reviews. What's keeping you from the place? Tell me in the comments.
Posted by Carrie at 2:36 PM 8 comments:

file under: tell me something good, the library

I think I might be patient enough now to begin enjoying poetry. The question is, where to start? Something like this sounds really good (from goodreads):

Scary, No Scary (Perfect Paperback) by Zachary Schomburg
Kevin Sampsell said: "Schomburg's newest is a whole new weird world full of birds, trees, and ponds. And the water in those ponds seems to be infected with something, because it turning people into half-animals and making the spooky wind sound like a depressing Galaxie 500 song. Another great step into the unique world of Schomburg."

Any suggestions? Do I have to start going to poetry readings?

Recently I've been browsing the NYPL Digital Gallery for inspiration. I love to look at costume illustration and architectural photography. Are there any digital archives or libraries that you look at? 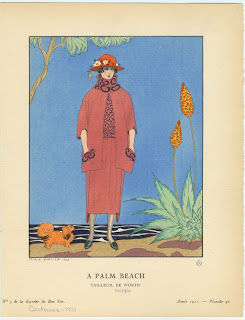 Nothing brightens up a foggy day like a contest. So, here's the new one:
Spin me a narrative inspired by this search term gem: "hard won wisdom being honest true asshole."

As always, any bloggable form is acceptable. Email me your entries.
The winning entry will be published here, and you will win a box of amazing from tryharderland.

Check out my review of Susie Cagle's Nine Gallons over at inkstuds.
Posted by Carrie at 8:35 AM 1 comment: