Dottie is a 3 year-old, petite pit mix with an unusual spotted coat and beautiful golden eyes. At 48 lbs., she's a great size for any home. She loves toys, going to the dog park, playing ball, car trips and exploring. She also loves learning tricks and will delight you with how quick she learns!

She is a little shy at first, but once she warms up, she is a loyal, loving friend. Give her your time--she is worth it!

She is wary of small children and cats, though, and should go to a home without them.

Dottie is housetrained, crate-trained, spayed, and up-to-date on her vaccinations. 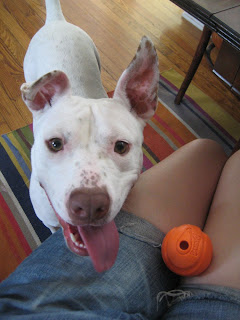 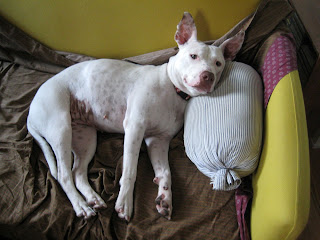 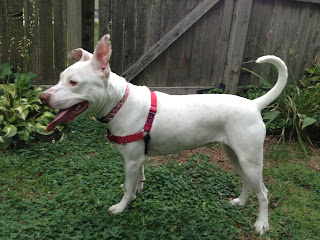 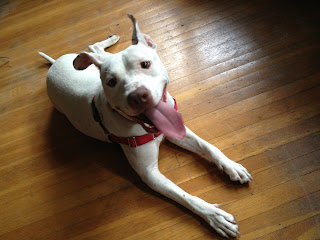 Posted by Carrie at 4:49 PM No comments:

Reading Emi Gennis' site, I saw that she was coming out with a new nonfiction story called "Radium Girls." From the teaser it seemed to be filled with drawings of old-timey ladies and gross medical stuff, two of my favorite things, and so I knew I would have to track it down. 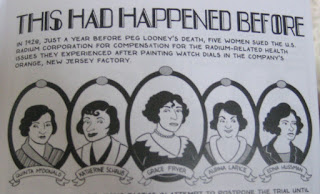 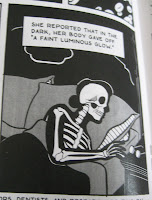 The story, "Radium Girls," covers the media scandal and resulting trial against Radium Dial, a U.S.-based clock company. Gennis pulls out great details from the transcripts, like "Factory managers told them not to worry if they swallowed a bit of radium-- that it would 'make their cheeks rosy, '" that show the chilling indifference of this particular company and some of the horrific side effects of capitalism. Gennis balances distinctive features with an every-woman look that gives he girls humanity without sacrificing their emblematic nature. That is hard to pull off in a comic with such little dialogue.

The rest of Cartoon Picayune #5 was just as satisfying. The editor's letter covers the development of the Picayune over the years, and, as a first-time reader, this was super interesting to me. I always like to know how the issue I am reading relates to the series. Would I have liked to see the letters section after the editor's letter or on the last page? Yes, but that might be just the traditional magazine editor in me wanting to make sure that everything important can be found. 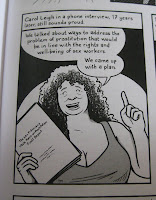 In the other feature, "Sex Workers of the World, Unite," author/illustrator Andy Warner covers the world of California sex worker rights by explaining concepts such as decriminalization and legalization and introducing us to some of the personalities involved, such as organizer Maxine Doogan and writer/activist/prostitute Carol Leigh. I love how he draws attention to the various settings where sex workers' rights come into play--the strip clubs, the streets, protests and press conferences--moving the story through any preconceptions the reader might have about where, and to whom, these rights matter. The way the talking head panels are drawn is really engaging; the emotions of the speakers in those moments really come through.

The short pieces, "Feeding the Meter" by editor Josh Kramer and Erik Thurman's "Seoul Grind" were less interesting to me, probably because food carts and coffee places are lower stakes than death and (possible future) taxes. 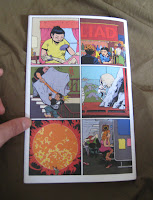 I love Pat Barrett's covers, especially the six-panel of portraits on the reverse. His drawings always feel somehow irrepressible, as if the energy behind the images is going to burst out of the page. I wish the healthcare worker had gotten the cover--she seems to embody the forebearance required for all work.

Speaking of the theme of work, the Cartoon Picayune pays, which is even more of a reason to support them. Cheap subscriptions are available! 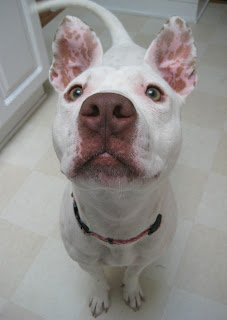 After the nightmare of medical Switzerland, I decided that it might be nice to foster a dog again.  Luckily I discovered that a bunch of the dogs in the ACC have videos made for them that you can access through Urgent Pets on Death Row and Facebook. I am a sucker for spotted ears, and after seeing this girl's love of playing ball, I had to see if she was still available.

Meet Dottie! Dottie is a 3 year-old pit mix with an unusual spotted coat and beautiful golden eyes. At 51 lbs., she's a great size. She loves toys, playing ball, sniffing and exploring. She likes to be near us at all times, but not right on top of us, unlike our last foster. She doesn't seem to have any separation anxiety either, which is great for those that don't work at home.

Right now she has mild kennel cough, so she can't meet 'n' greet other doggie friends, but she seems interested. 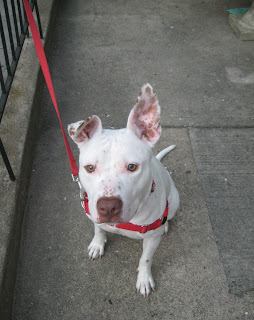 Here is her listing on Sugar Mutts, the rescue that pulled her from the ACC for us.

Here is the video that won my heart. 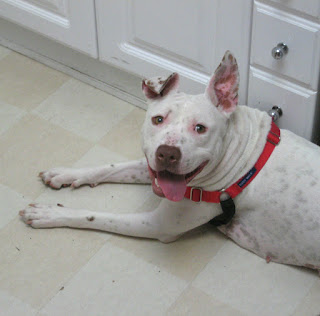 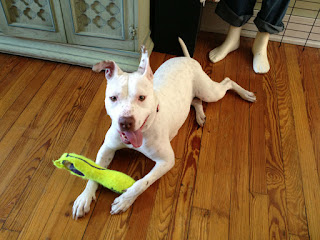 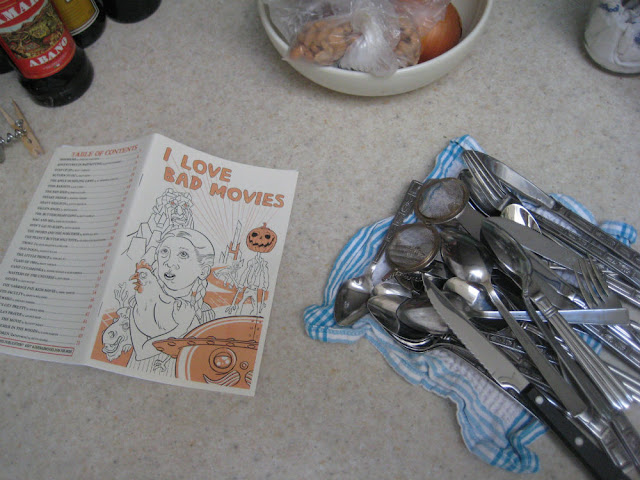 Posted by Carrie at 5:23 PM No comments: