There are five days left in the contest on Amy Ambulette's other site.

To win, you email Amy with your best worst motel experience, real or imagined.

The prize is a limited edition, handmade chapbook containing a story about Frankie, one of the characters in her new book. Twenty people can get that prize, so get to it!
Posted by Carrie at 5:55 PM 3 comments: 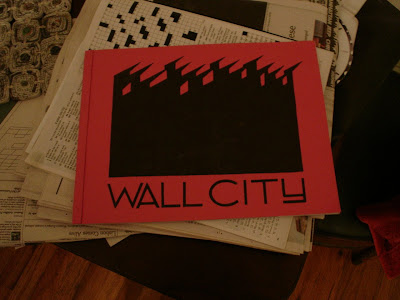 I am slowly working my way through the great books I got at MoCCA this summer. When I went to the fest I had a few things on my list: Tear Stained Make-Up, Black Mane, the new Meathaus (which I didn’t get), and the new Sundays anthology of which Kim is a contributor. Though I knew all graduating members of the CCS class of 2008 had to turn in a thesis, and I have really enjoyed his other comics like Bird & Bear, Kim’s wasn’t really on my radar. Stupid broken radar.

Kim’s characters’ clothing often looks like it has been beset by parasites, which, though the squiggliness may be in part his attempt to develop his own style, works very well in this comic of suppressed emotion. These characters are crawling with internal turmoil, but it is somehow just the way of the world.

Wall City tells the story of a worn out EMT named Minty and his chance encounter with another lost soul in a hoody. She has a dead sister and he has a dead dad, both suicides. Minty hasn’t really processed his father’s death, causing not only his inertia, but hallucinations where his father questions Minty’s inability to get over his somewhat mysterious death. Because of these cues and others, I though Wall City was going to be an unraveling of Minty’s father’s death, where Minty finds his purpose in being a detective of sorts. Instead, Wall City is a beautiful, weird story about grief.

Kim really gets to the weird internal freeze of grieving with his story’s cold and stark atmosphere. The emotional grunt work it takes to move through a death is the central metaphor of the book but instead of lots of crying and being crazy these two build a wall. The wall is both obvious and perfect—a huge feat for such a young creator. The fleeting and often practical nature of relationships forged in grief is shown in the context of the relationship between Minty and hoody girl. Lives are marked differently by the loss of important people in our lives. Some people are swallowed by it. Others are set adrift. The epilogue is a testament to living through it.

Wall City was a great surprise. Please check it out.
Posted by Carrie at 1:45 PM 3 comments:

file under: food, noodlin', the past 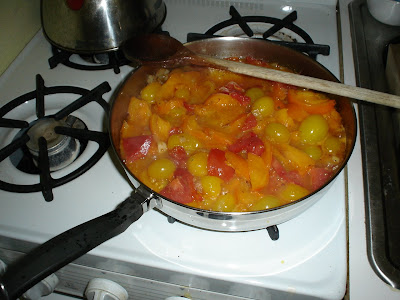 I wish there had been more summer nights like this.
Posted by Carrie at 1:08 AM 3 comments: 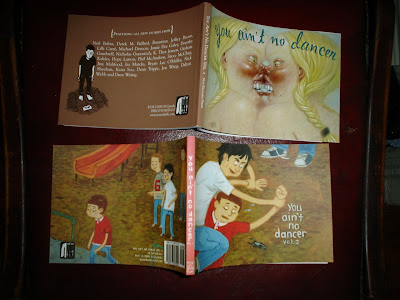 I first heard of these anthologies during an Inkstuds binge late one work night. The editor of New Reliable Press was talking about how publishing comics makes you broke and he sounded all depressed, but something about the conversation made me want to check out the books. So I did, and after seeing the contributors list, I ordered the two volumes available. When a tiny packet arrived from Canada a few weeks later, I was a bit surprised. Both have the dimensions of a postcard book.

Volume one has a cover illustration by Dave Cooper, Canadian super-cartoonist, featuring his pale, fleshy women/monsters. The volume features a wide range of styles in black and white. My favorite three stories were “The Curse of Kauai” by Dorothy Gambrel, a funny (and surprisingly affecting) meditation on your 20s for straight women (and selling out for everyone else) done in a more detailed cat and girl style, “Did You Know?” by Dean Trippe, a story about the wreckage a parent wreaks when they abandon a child and the missing parts that child will grow up to notice and “Flood” by Lili Carre, a simple and beautiful take on a relationship affected by Alzheimer’s, where what is merely a rainy night to a lame son is a flood to his sick mother. In fact, this volume had a flood theme—three comics in the collection are about floods, including two very sad and eerie ones by Hope Larson and Drew Weing.

Volume two is themed “youth” which made me shudder a little. I expected many comics about nerdy boys being victimized by peers and society. Luckily my arrogant assumptions didn’t stop me from digging into the collection. The colorful cover by Jeffery Brown looks painted, which was new to me, and I love it. His story, “Chimney Preference” gave me a laugh—it was so sweet and silly. “Indian princesses” by Colleen Mac Issac captures that moment where you and your childhood best friend are suddenly not on the same planet, “Of Course, Of Course, Of Course,” is a story about a nerd boy but K. Thor Jensen’s art is so perfect for the story of a kid trying to develop superpowers, that I forgive him the cliché. “Litter,” by Grant Reynolds is the only story to really show the dark side of the theme, and his does it beautifully and devastatingly and completely word-free.

I hear that volume three will be out in September and I will be sure to pick it up.

Also heard through the internets—love object Kate Beaton was asked to appear in an unspecified issue of YAND, sadly it was a surprise.
Posted by Carrie at 12:50 AM No comments:

"Like the Magical Negro, the Manic Pixie Dream Girl archetype is largely defined by secondary status and lack of an inner life. She's on hand to lift a gloomy male protagonist out of the doldrums, not to pursue her own happiness. In the late '60s and early '70s, MPDGs often took the comely form of spacey hippie chicks burdened with getting grim establishment types to kick back and smell the flowers."

I find that the older I get, the less I care to see relationships with wacky, supposedly artistic, yet so uninspiringly flat, ladies be the turning point for mopey male characters. Those guys are so tortured-- I should care about them because-- wait, why? Wouldn't it be better if all these guys started a flirtation with extreme sports or meth instead? That would be just as realistic, don't you think? It's not that these characters fall in love with the Manic Pixie Dream Girl, they just use her to come to some kind of understanding of themselves. After all the sexin' and/or adventures stop, so does the relationship.

Can movie makers please stop thinking the mopey-man-flowers is interesting at all? It is so insulting to any creative woman with a brain and a real life. Sadly female actors and audiences aren't the only ones stiffed by this lameitude, the guy characters in these films end up being merely a more charming bag of tics in the end.

The worst is how many men, especially ones who indulge in lots of media, think that the Magical Pixie Dream Girl exists, and if you are artsy, you could be her. If you don't do your job to shake that artsy boy loose, you'll find out just how disposable you are.

Worse than the MPDG is, of course, the Unbearably Sexy Crazy Lady. USCLs are darker and show more tit. Rather than just flitting away like the MPDG, USCLs get to succumb to drug addiction, suicide or mental illness. Sexy, no? Well, as long as she's out of the way so the protagonist can live his new life...

file under: noodlin', other blogs, ugh

[This review is by B. I pointed him towards this comic at MoCCA. I have been really busy, so he kindly wrote this review to keep it fresh in tryharderland. Enjoy. And, if you were wondering, I feel pretty much the same as he did about the book.] 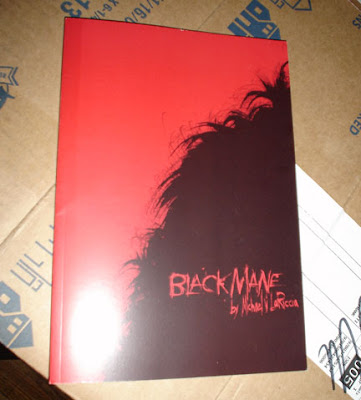 Just two pages into Black Mane I felt like Michael LaRiccia was calling me out. Within those first couple of pages, a Boston townie motorist-cum-monster apparently mistakes Mike, Black Mane’s protagonist, for someone of Middle Eastern descent. And throughout the book, many others seem to assume Mike is Indian, Latino, or some other “other.” Embarrassingly enough, these moments in the book reminded me of my own surprise when the swarthy guy who sold me the book at MOCCA Fest—who, I admit, had registered as, most likely, Latino in my mind’s eye—revealed that he was, in fact, the (Italian-American) author. Having read his book, I have to wonder now whether he could actually see the thought bubble above my head asking, perplexedly, “Italian?”

This is the sort of often-cringeworthy confusion that Black Mane so effectively captures. Mike constantly questions where he fits in in a world that, in varying degrees of subtlety, shows itself to have serious, serious issues with race and, predominantly, gender. Yes, much like the real world, though I suspect most people experience it in a more coded, less jarring way than Mike does--sometimes the brutality of certain episodes in the book detracts from LaRiccia’s generally incisive observations. But this is probably largely because the art is so damn good at capturing the violence that runs throughout the narrative. Rage, frustration, righteous anger—they all cause the male characters experiencing them to metamorphosize over the course of two, three, four panels into truly disturbing beasts. A guy who thinks his girlfriend is cheating on him turns quasi-demonic, eyes bulging and teeth sharpening, while he scrabbles at her car window. A dude being ejected from a nightclub snarls and salivates, his skin all craggy and reptilian as he resists the bouncers and screams (yes, misguided) racial slurs at Mike. But don’t fret, Mike himself has an alter ego—a creature that seems about equal parts lion, bear, and man topped off with the titular wild black mane of hair. Kind of like the meanest, scariest troll doll you could conjure up on your darkest, evilest bad trip.

As a Boston-born, Italian-American, sensitive guy-type myself, I saw a lot that looked familiar in Black Mane. And I suspect the book speaks particularly well, though certainly not exclusively, to other guys who think a certain way about the world and, probably as a result, have a certain amount of righteous indignation, but who realize, like Mike, that they are just “not a fighter.” And hey, that works. As the book suggests, plenty of fucked-up situations can be remedied without going all Black Mane and beating the shit out of the bad guy. Sometimes all you need to do is be smart enough to tell someone who’s bigger than him.
Posted by Carrie at 1:41 AM 2 comments:

Lauren Weinstein has a new blog. I read her new book, the giant, eye-catching,Goddess of War last week. More on that later.

She is such a super cool lady. I look forward to keeping up with her blogularly, though she claims that she won't be leaving the house until more work gets done.
Posted by Carrie at 6:32 PM 1 comment: