Looking for a safe space to have a vagina

I listen to a lot of podcasts. I love to let my eyes leave the screen for a while and let my brain grapple with information in another way. It’s generally a very enjoyable way to spend time.

As I recently prepared my place for guests, I clicked on the science fiction cast StarShipSofa #240 to make the cleaning go faster. Everything was going great, as usual, until J.J. Campanella’s Science News. His intro to the first story began, as you may remember like this: “The first story of the night may make the male part of the audience a bit uncomfortable because it has to do with, well, female plumbing, so to speak. So if you have kids listening or are just uncomfortable about the topic you may want to skip ahead about five or six minutes to get beyond this particular story. So what is this anti-macho, squirm-inducing story?”

The answer to that is: a very technical story about the human microbiome, specifically that of the vagina.*

This embarrassing intro not only undercut the cool science of the story but it also made me feel incredibly angry and sad. Here’s why:  First it suggests that male audience members are so immature as to find a rather dry (though interesting) story about vaginas somehow unlistenable. StarshipSofa often includes stories where men and women fuck each other, most often, vaginally—including the story before this one. So imagining a vagina is cool if we’re talking sex, but if we are talking science, it’s gross? Way to reinforce negative stereotypes of science fiction fans, Dr. Campanella, while undercutting your own science reporting at the same time! At its most innocuous, this kind of intro panders to the immature and close-minded, more insidiously, it provides support to the idea that it is totally reasonable to think that women’s bodies are gross, that it's okay, if you are a man, to be ignorant of the non-sexual aspects of the vag.

And, worse than gross, apparently “the topic” is unsuitable for children. Considering half of those hypothetical kids have vaginas themselves, this idea is absurd at best. It is definitely a pretty terrifying statement about how many people conceive of reproductive organs, especially those of women, as shameful, embarrassing, and most importantly, a dirty secret. If you, as a parent, are not comfortable with your kids knowing about their own bodies, or them hearing the correct terms used for their parts, then you are failing in your job. Frankly, any parent listening to a podcast aimed at adults, full of violence and other adult situations, with their children better be prepared to answer much more challenging questions than “What’s a vagina?”

Even though the terms “anti-macho, squirm-inducing” are thrown out a with a little cheek, it is still incredibly disappointing to hear SSS’s science correspondent use those words to describe a story about a part of half of the population’s bodies. Why do I have to hear this shit on a podcast dedicated to the world of the fantastic, fiction or fact, where anything is supposedly possible?

file under: earbugs, scifantastic, she blinded me with, ugh, whaaa?, what's what

An excellent essay about letters, choices, writers, grandmas and Martha Gellhorn over a The Millions by friend-o-tryharder, Amy Shearn: A Goofy State of Mind

The Vatican, yes that Vatican, has opened, and is sending out, a portion of their massive "Secret" archive. The real, live items will be exhibited in Capitoline Museums in Rome, but you can see some very intriguing tidbits here: Lux In Arcana

I started buying magazines. So many subscriptions bought, forgotten about, then appearing, regularly in the mail. B did the same during the contagious fugue state where credit cards flashed to the sound of glossy pages flip flapping. It was a good idea: Cabinet, Gastronmica, wax poetics, bitch, BOMB, The Coffin Factory, and more now come to our door. 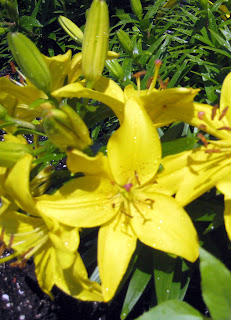 I grew these and now they are gone.
The rest of the summer is waiting.
Posted by Carrie at 12:54 PM No comments: