1) The Rumpus has been kicking it out 70s-Heart-style. So many of their offerings help me think better. Here are a few of my recent favorites:
The Throwaways by Melissa Chadburn
When Barbara Jean Was Missing by Rebecca K. OConnor
Night Shifts by Elissa Wald
Transformation and Transcendence: The Power of Female Friendship by Emily Rapp

2) In other excellent news, Roxane Gay, one of my favorite essayists, is now their essay editor. This can only mean good things.

3) Here are some books that I am looking forward to reading:
At the Mouth of the River of Bees by Kij Johnson--I've heard many of these stories on various science fiction podcasts and I hope that they will be as good on paper.
Baby Geisha by Trinie Dalton--I really enjoyed Wide Eyed in 2010.
Three Messages and a Warning Eduardo Jiménez Mayo and Chris. N. Brown, editors--Short stories from authors I've not heard about before, published by Small Beer Press. Sign me up.
Nurse Nurse by Katie Skelly--Being the jerko that I occasionally am, I never picked up Nurse Nurse while it was in minis. Now we can get the book from Sparkplug Books and support Skelly and a great press.
The Mountain Lion by Jean Stafford--NYRB rarely lets me down. Plus an afterword by Kathryn Davis, what could be better?

4) Dang, Red Lemonade has republished Lynne Tillman's Haunted Houses? I loved that book, especially when the characters kept going to the movies. If you aren't going to get it from the library check it out in this way with one caveat--if you buy the print version, expect the cover to be wimpy. Seriously, the pages of Zazen were creamy and strong, but the cover curled like dead leaf in the autumn of everyday toting. Come on with that.

5) I am working on two things right now that I am excited about. This is unusual and probably means that both are terrible writing. Still, finishing things is the main thing for right now.

What is your thing for right now?

Posted by Carrie at 4:29 PM No comments:

Looking for the future & The Rules of Inheritance

The only memoirs that I really enjoy are either done in comics or super trashy forgotten-star tales. However, a rash of recent books by authors I love have made me much more curious about the genre. Over at The Rumpus, I read this interview of a writer I've never heard of because the lede mentioned The Nervous Breakdown, a site two of my friends have written for. Though they've both jumped ship for other projects I have a fondness for a site that supported those great ladies. I really want to read the book that this interview is about, The Rules of Inheritance, especially if the writing is as straightforward and compassionate as Smith's interview answers.

The Sunday Rumpus Interview with Claire Bidwell Smith had me blistering in recognition as Smith talks about grieving and the struggle to believe in the future: "Ultimately, I think I became a very independent person. I found a confidence and a brassiness that wasn’t shared by a lot of my peers. But on the flip side I also tend towards self-indulgence. Basing every decision on fuck-it-we-could-die-tomorrow-let’s-do-the-fun-thing isn’t a practical way to live." Getting out that mentality enough to make good decisions about, for instance, retirement savings is very tricky.

She says, "For a long time, and perhaps even now, I had trouble relating to people on a surface level. I couldn’t bring myself to chit-chat, to talk about trivial things. Perhaps it was a self-centered and juvenile thing, but I couldn’t let people know me unless they knew who I really was and what I was going through. But living in this kind of raw, authentic way caused a lot of people around me to open up as well... I also think I have a kind of magnetism for damaged people, or people who have been through big life experiences." For me, that inability to relate on a superficial level after my brother's death, something I am also slowly re-learning how to do, was a reaction to the the overwhelming isolation I felt as well as the major shift in my priorities, especially in my relationships. Who cares about the weather when the world has ended? Let's love each other! (Or never talk to one another again!) It is simply a lot easier to talk to someone who has experienced loss and knows that hole you feel, especially at 23, when most people's main concerns involve terrible boyfriends and making rent. I also discovered, much like Smith, that being a walking example of mortality either makes people run away or tell you everything. Sometimes they do both.

file under: loss, the past 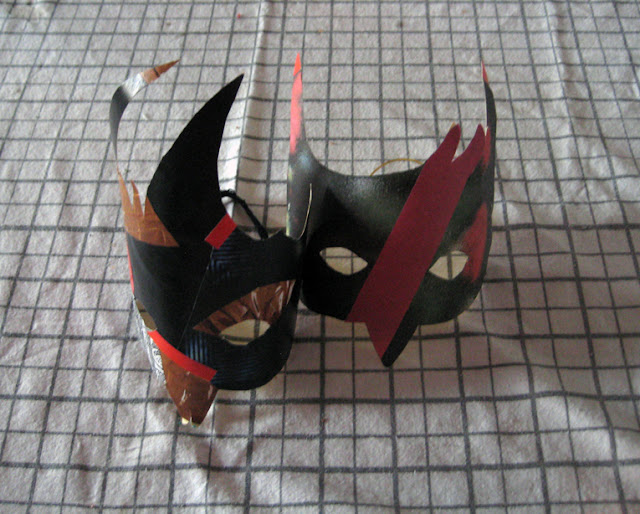 Been sick and sicker.
See you soon.
Posted by Carrie at 4:56 PM No comments:

1) Maureen F. McHugh writes another book and it makes her a household name.
2) Everyone reads this essay by Roxane Gay and takes it to heart: "When you really think about it, though, the condescension and trivializing in the faux apology are kind of outrageous. In the time it took Grossman to point at his list and acknowledge the lack of diversity, he could have simply added two or three books to his list by women or writers of color that also interested him. Surely such titles exist." Everyone reads everything by Roxane Gay.
3) Vanessa Veselka writes a short story collection and it is illustrated.
4) I make some homemade shelves and paint them red.
5) Pitching essays and reviews out again becomes a thing I do.
6) Eleanor Davis makes comics again.
7) I start reviewing minis again in a safe n sane way.
8) Shelley Jackson makes a comic or writes a novel or both!
9) After getting Breathers published in a nice edition by an awesome small press with a big PR team, Justin Madson busts out another big, smart book.
10) My friends and I-wish-they-were-friends keep on making things, no one feels defeated and we all know each other.

This is not an exhaustive list by any means. I forget names all the time. The best things become part of my brain and lose their identifiers, but even so they are there. I will keep you posted if I think of anything else.

Like a drunken, cigar chomping editor of yore, I've moved the deadline for the Winter 2011/2012 contest forward to January 23. Now get cracking!
Posted by Carrie at 3:43 PM No comments:

file under: WIN EXCLAMATION POINT
Here is something I did: 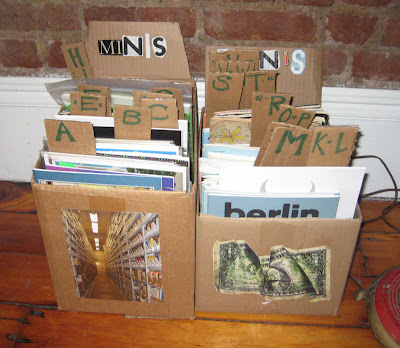 I decided that I actually wanted access to my minis and some reliable way to find them. Arranging them alphabetically by author seemed the way to go, and these corrugated cardboard boxes (acid content be damned)  were convenient receptacles for most sizes of minis. The tinies & humongoes are on the bookshelf above in no order,  but the bulk of my collection is now here. I was able to do a bunch of weeding as well. The compilations, like my beloved Papercutters, are on another shelf right now, but will end up in a box too when a suitable one arrives.

Now I have one big box of unread stuff to go through, and I am sure that I will need at least two more browsing boxes of this size when I am through. As I hinted at above, this is not a great longterm preservation solution, but it is cheap. Perhaps when I have a little more archive money (hire me!), I will splurge on some acid free boxes.

I also weeded my fiction collection and arranged that alphabetically by author as well. I tried to get rid of the Pynchon and other such things, but B wouldn't let me go all the way. As punishment, he must read Gravity's Rainbow in 2012.

All this talk of minis may have you wondering when I am going to start reviewing them again. I promise to have gained a new PO box by the end of January. See you in the mail.
Posted by Carrie at 3:37 PM 4 comments: