If you don't read these, you are an asshole:

thoughts from a cold snap night

Revenge has been a topic of conversation in tryharderland recently. We've been talking about the revenge film, but when I am talking to myself the conversation is about wrongs both small and impossibly large and the poisonous wish to redress them all with the limitless force of unsoothable rage. There are, of course, problems with this.

That is what this story is about and it is truly frightening:
Oded the Merciless by Tina Starr
Posted by Carrie at 11:11 PM No comments:

The Good Thief by Hannah Tinti 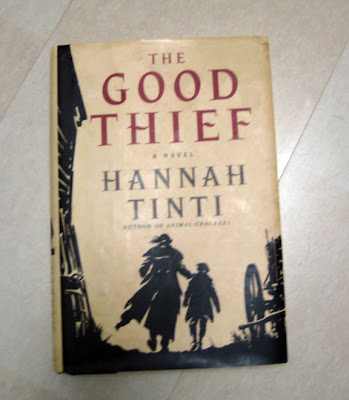 Last year I read the still-unreviewed book of short stories Animal Crackers by Hannah Tinti and enjoyed it overall. I bought The Good Thief at Unnameable Books the other day, fueled by vague remembrances of good reviews, a bookish companion and the ten bucks burning a hole in my pocket.

I started the book that night and got sucked in immediately. The story is about an orphan named Ren with five sticky fingers and a mysterious past. After years of lining up in front of a sinister statue of St. Anthony for prospective parents looking for a farmhand, a shop boy, or maybe even someone to love, and not being picked, he gets adopted by a man that claims to be his brother and seems especially convinced by Ren’s missing hand.

The Good Thief is an enjoyable ride marred only by Tinti’s protective love of her main character. Firstly, she occasionally imbues him with internal thoughts that a boy who’s rarely seen the outside of a Catholic monastery wall wouldn’t likely have. When he thinks of God, he pictures a “benignly neglectful garden, carefully snipping His roses,” a musing that seems too sophisticated and far from the Catholic indoctrination he received. When he imagines a real home he imagines a set of “good “ dishes, unconvincingly knowing such a thing exists, specifically “white porcelain” and a “small bowl of wildflowers, picked from behind the kitchen door, pink and blue with tiny yellow buttercups.” Apparently, Ren has a flair for fantasy interior design! The few passages like this tore me right out of the story and detracted from Tinti’s otherwise careful rendering of Ren by trying to give him delicateness that just translates into preciousness.

Additionally, as much as no one wants a one-handed orphan boy to suffer extra bad luck, real pain for Ren is necessary to make his story real. His journey is certainly not without pitfalls, but at each tense moment the reader knows that Ren will end up essentially okay through quick thinking, luck, or the mood swings of another character. The circumstance that is supposed to make the ending bittersweet doesn’t quite hit the reader where it hurts, because the blow is weighed down by the sack of coincidences that lead up to it.
Posted by Carrie at 3:52 PM 3 comments:

Worth a trip to New Brunswick, methinks:

One of the speakers is Andrew Beccone, of the Reanimation Library, which shares space with one of my favorite groups in town, Observatory. I've wandered through the library a few times before events and enjoyed looking through the collection, especially the science books. Old-timers sure knew how to create an intriguing diagram.
Posted by Carrie at 1:01 PM 1 comment:

file under: go, the library

Two friends of Try Harder are losing it at The Nervous Breakdown:
Amy Shearn is looking for a place to lay her head.

Weekday Worrier is at his place explaining why there are such terrible sounds coming out of our apartment recently.

So, Spring Break has so far been sitting inside, wondering when we moved to Scotland and could we please move back now, ok? But today the sun is out, I've got seeds and pots on my mind. It's too bad that I had to say goodbye to my garden, but now I have sun!
Posted by Carrie at 2:24 PM 4 comments:

file under: green, other blogs 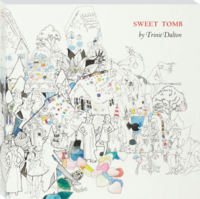 Sunday night I babysat a much-missed blogger's baby. Or at least I think I did; she was asleep and made not a peep so I didn't even crack the door for fear of waking her up. Instead of using this block of time in a different home to rifle through my friends' things and judge them, I decided to read a book that the baby had apparently picked out.

Sweet Tooth is a tiny book of seven linked stories centering on a witch named Candy who lives in a pink city. She hates being a witch and can't decide if she should just kill herself, or bring all of her loved ones with her. I enjoyed the parts where she chronicles her attempts to be "non-witchy" as a girl and the perils of being a witch's daughter when you just want to have friends like you for you--not for all-you-can-eat candy.

Beyond her mother issues, older Candy has her fair share of bad relationships. The most steady is that with a vampire named Chad who loves her, but loves her blood best. Despite the handicap of poor social skills, long life and shitty lovers, Candy wants children on occasion but finds that, "Just because I can have fifty babies here within the hour...doesn't mean that I should or that I'll be a good mother." Considering that her own mother had stereotypical cravings, her reluctance is understandable. I like that even a with with magical baby-dispensing powers agonizes a bit about passing on the curse of witchery. For all the lemon drops and broomsticks, the anger of being born with burdensome and unpleasant traits and the subsequent fear of spreading them is a central theme in Sweet Tomb. It reminded me a lot of conversations I've had about mental illness in families.

The final two stories, "Killer Pair" and "Death Wish" are the most psychedelic of the group and the least interesting. Once Candy leaves the forest and her candy house for the city, not to return until she has achieved the lofty goal of "pain-free love in my heart and some healthy lust" she loses a bit of her magic.

Sweet Tomb would work well as young adult fiction in the vein of the Weetzie Bat stories. All of the seething, sticky anger was lost a little on me, but a 13 year-old is right there, trying to find her own path out of the woods.

The publisher,
Madras Press, publishes stories and novellas whose sale benefit charities chosen by the authors. Aimee Bender also has a story in this series that I am going to look for next.
Posted by Carrie at 9:00 AM 2 comments:

A few nights ago I was on the subway when I encountered a woman from my school. At first we yelled at each other across the car, listing the classes we are taking this semester and griping about a past class that was absurdly horrible. I moved to be nearer to her and we chatted some more while our companions either ignored us or zoned out, waiting for some indication that the conversation had moved on to some more interesting topic. While it was happening I didn't care--I was relieved that I could talk with someone who knows the irritating intricacies of [REDACTED], but I know it probably ruined the ride for everyone else.

So, I won't tell you about school even though that is basically all I am doing now.

I picked up issue 6 of RASL last weekend at Desert Island during Zane Grant's awesome comic release party. Is it ok to say that I am a little disappointed that the majority of the issue was a bio of Nikola Tesla? Sure, it's a good story, but Tesla is an indie inspiration juggernaut now and it was annoying that the usual inventiveness of the book was overshadowed by bio details I've heard before. Yeah, yeah, I know that Smith is doing a little alternate-past stuff with Tesla's life and work but it just seems a little weak. I can't wait to get back to the story!

I joined twitter so I wouldn't miss things like this:
"A memory is a shadow of the past. Drink a glass of water to be back in the present"

My twit name is carrietryharder.
Posted by Carrie at 9:04 PM No comments: