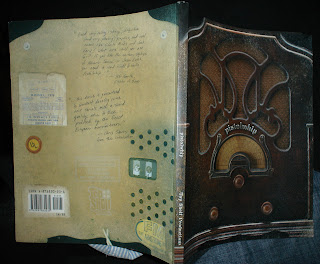 Radio, murder and noirish temporal shenanigans await you in pistolwhip. Dames, detectives and a mysterious violinist populate this mystery—the sort of characters I can get into on a foggy day—but for some reason I just couldn’t engage with this story. Usually I am up for a spot of metafiction-y mindfuck, (here the seemingly straight forward drawn story is interspersed with a radio scripts that become increasingly to seem that they are driving the action), so I don’t think it was the structure of the story that threw me out of the book. As much as I don’t want to say it, the distracting factor in pistolwhip is the art.

Matt Kindt’s long strokes, while adding fluid movement to his work, end up making my eye do more work than it wants to. His cartoony characters can look quite different from panel to panel and that made it really hard for me to instantly be able to place the action in the story from page to page. Often just a single characteristic like a hat or hairstyle differentiates lets you know who’s who from page to page. This was a huge problem for me in 2 Sisters, which I couldn’t even finish. In pistolwhip the characters are a lot more distinct but didn’t seem to fit with the dark and dirty feel of the story.

I’ll probably try to read it some other time, but this is not a book for when you’re easily distracted.
Posted by Carrie at 1:09 AM 3 comments:

A few minutes ago, after days of concern, a glitch in an application to one of my top choices was finally resolved. I feel so much better now.
Posted by Carrie at 4:57 PM 2 comments: 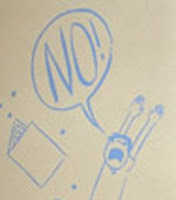 I have a review of No! over at inkstuds. Check it.
Posted by Carrie at 1:16 AM 3 comments:

file under: comics, read me, reviews

“no monster exists that cannot be made pleasing through art” 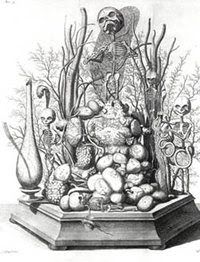 While at work, I stumbled upon this amazing online exhibit by The New York Academy of Medicine called A Telling of Wonders: Teratology in Western Medicine through 1800. All the material is from their library's collections, which makes me want to go check out the historical collections, which, from the online teasers, seem a bit like a subdued (and fetus jar-less) Mutter Museum. Field trip anyone?

Though it gives great summaries of fascinating and bizarre historical books and pamphlets, the visual elements are too small and too sparse. I wish that there were more scans from the various books cited and a gallery of the more compelling images. Still the exhibit is a nice tease and includes a great bibliography of current works related to teratology. Things like this are the very reason I considered applying for a medical librarianship concentration.

What monsters are you studying these days?

(image from the exhibit: engraving, Frederik Ruysch)
Posted by Carrie at 4:15 PM 2 comments:

file under: pretzels, she blinded me with, vile bodies, whaaa?

Last night I came home to an apartment so hot that all the chocolate and toiletries melted. I also began reading Kathryn Davis' Hell.

Coincidence? Only you can tell me, tryharderlanders.
Posted by Carrie at 1:35 AM 2 comments:

I'm back and eating a kick ass dal that I adapted from a recipe in Curries Without Worries by Sudha Koul. I added extra ginger in the hopes it would revive me post-travel. 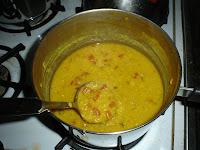 All from the pantry, except the ginger, which I got from the fridge.
***
The winner of the contest is ctheokas. I had another wonderful entry from a previous winner, but I think she's disqualified this round. Yay Chris! Send me your address, your package of awesome is waiting.

As an aside, why don't more people like to win? What sort of contests would you like to see here? I'm sorry, but for now no win-a-date prizes are available.
***
When we arrived at the apartment I had a letter from one of the schools I applied to. I sat on the couch, bracing myself for the let down. But guess what? That feeling of face-reddening disappointment never came. I got my first acceptance! I can only hope that there are more where that came from.
Posted by Carrie at 5:32 PM 12 comments:

I am going to be in the Lone Star state for the next seven days.

I'll announce the contest winner when I return.

I Killed Adolf Hitler by Jason 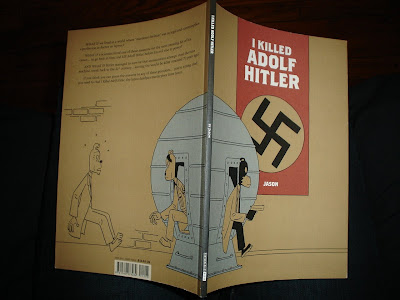 I picked this up in the bookstore on 30th St. Station on a trip back up from Philadelphia. I was surprised at the availability of good comics there, but not so much by the 15-year-old screecher that rung me up. “Hitler?!?!? Yo that shit is fucked up!?!?” You are right, my boy, Hitler is indeed fucked up, but in this book, he is not really any more twisted as the hit man-hiring folks of Jason’s world.

In this case the world in an alternate present Berlin where people pay to bump off others for the slightest social misstep. It begins with the most delightfully nasty two pages, a reminder that though Jason’s characters are cat and dog people, they are imbued with the singular human perversity. The main character is one of this society’s contract killers and he’s good at his job. In a surprising and subtle emotional moment for this surreal noir, the unnamed killer goes to a bar for a beer and is approached by a former client, a rather downtrodden dogman. After he introduces himself as a man who had his wife killed by our killer four years before, he launches into this:
“As for me, I got married to this other woman I’d been seeing. We’re very happy. Well, we were happy… Lately, it’s more like… We get up, we have breakfast, and I see this look in her eyes. I know what it means. I’ve seen it before.”

“I’m sorry. I don’t know why I am telling you this. You just wanted to have your beer. I’m sorry.”

“I guess I’d better just go home, get it over with. Wish me luck.”

When our killer gets a contract to kill Hitler, he barely blinks. Then he gets into a time machine that looks like an old timey dive helmet and gets prepared to whack the Furher. After a failed attempt, things get temporally wacky. Jason handles this aspect of the story very well by giving a constriction to the time travel—the machine takes 50 years to charge. Hitler appears as an opportunistic scoundrel, not evil but merely there at the right time and place. The search for him frames what turns out to be a really sober, but intriguing story about the relationship between the killer and his bobbed ladyfriend from the first WTF pages, as well as a meditation on time. I am not usually all that keen to read such things, but Jason is that good. I should also mention that Kim Thompson’s translation is perfectly seamless and creates a mood that seems to be exactly what was intended.

Jason’s art is precise and evocative as usual, despite his characters only having empty spaces for eyes. I really enjoyed Hubert’s coloring; the matte, solid colors give the story a faded-slideshow effect that I loved.

The one flaw: it’s too short. Actually its not, but I tend to feel this way about all Jason’s book. Though all the novelettes I’ve read of his are perfectly edited, maintain perfect tension and fulfill their plots, there are always little avenues that I wish could be expanded to satisfy my curiosity. In this book, it’s the back-story of the time machine inventor and the details of the alternate Berlin pre- and post-Hitler’s murder. I hope that one day Jason lets one of his stories sprawl beyond its borders. I’d like to see what emerges from the sloppy edges.
Posted by Carrie at 2:54 AM 3 comments:

A million years ago I read Lust by Edna O’Brien and really liked it. I picked it randomly off of a mezzanine shelf at the main library in Philadelphia because of her first name and the one-word title. Twas quite romantic, but I used to be that kind of gal.

At a bookswap last year I picked up House of Splendid Isolation and stuck it on a shelf for later. When I finally got around to it boy was I disappointed. Whatever feeling of luscious language and tension I associated with O’Brien has disappeared with reading House of Splendid Isolation. It’s not that the book was horrible or anything, it just didn’t add anything to the elements it presented: growing older, being a woman in old age, the IRA, betrayal by politics and revolution.

Only two people thought big and decided to enter the number one 2009 contest. I don't understand the sluggish response since my hits have exploded the past month or so. Come on newcomers, don't you like to win? Well, now you have 6 more days to do so. 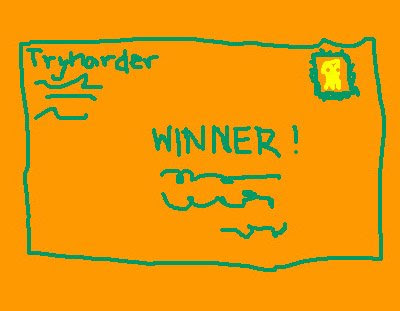 The task: tell me about your reading goals for 2009. tell me good!

The form: anything that can be blogged, like a short essay, a song, a comic, images, etc.

The transmittal: leave a comment and/or email me [ms.tryharder AT gmail.com] with CONTEST in the subject line.

The prize: a copy of one story issue #113 (Ben Greenman's letter writing story "Tremulant"), books of the exciting variety and other wonders from around tryharderland. 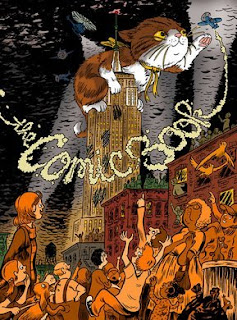 A trip to Austin English's 20 Questions blog reminded me how much I love Aaron Renier's art and how good Alec Longstreth's coloring is. 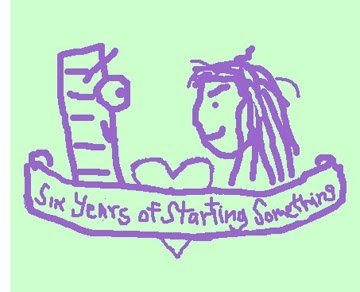 I have a review of the newest Papercutter at over at inkstuds right now. Please feel free to leave any comments there so Robin thinks that people actually care about the stuff I write on his site.

I'll have a bunch more minicomic reviews over there soon as I've just disimpacted a large wad of applications this past week.
Posted by Carrie at 1:08 AM 1 comment: