The Understory by Pamela Erens 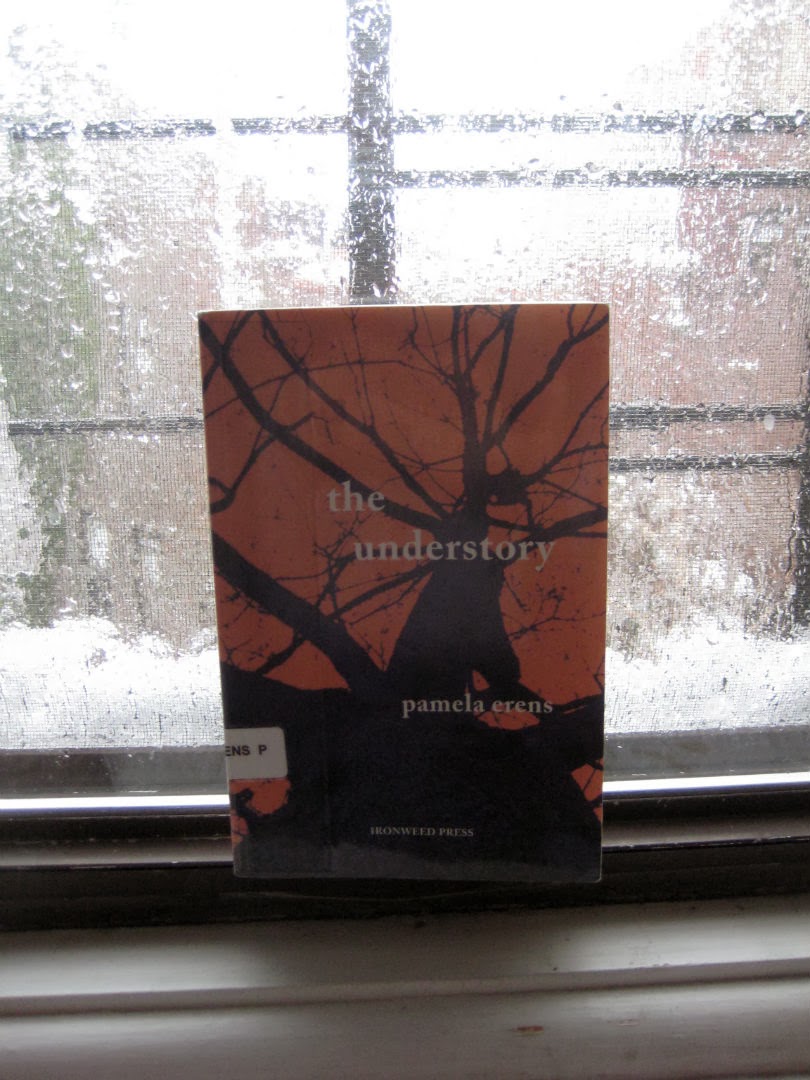 For those experiencing endless winter, I suggest Pamela Erens' The Understory. When I read this book last year, it was not winter, but The Understory brings the chilly like nobody's business.

The Understory is the story of a man whose life is very small and very lonely. Then he falls in love and it breaks him.

I know a lot of men with small lives. They tend to be unable to deal with change or closeness. Everything is refusal. Everything is resistance to reality. When the main character of this story, Jack, revealed himself to be one of those men, I couldn't fathom continuing the story. I got enough of that shit to deal with when I am not reading.

"My daily schedule was fixed: I rose at daybreak, walked to the park, spent some hours at Carl's bookstore, had my lunch, walked downtown, climbed the bridge."

The details of those spaces and places are what makes this book ring. His crumbling apartment is freezing and nasty in that way that cheap New York apartments can be. We later find, it is not exactly his, and not just because he is getting evicted to make way for a condo renovation. The routine places, the bookstore, the diner, feel limited and miserable, but since we are in first person, we can also see the comfort in that Jack takes in those limitations.  In the diner:

"Marion appeared over my shoulder and I closed the paper, embarrassed. I set the eviction notice on the table next to the coffee. Paul X. Giglio, petitioner to the Civil Court of the City of New York. It had yesterday's date on it, the twenty-third of November, and it occurred to me that my birthday had been on the twentieth. It was the first time I had thought of it and I had to stop and ask myself just how old I was. Forty--I had turned forty. I touched the hot rim of my coffee cup. I had entered a new decade of life without even noticing. I tried to remember my thirty-ninth birthday, or my thirty-eighth. Nothing came to mind."

Those last few lines make my skin crawl. I used to spend a lot of time in diners and those pauses are familiar.

The Central Park Rambles is where Jack finds his "variety." Or, at least, he describes it that way. Checking in on the plants and shrubs on his route, he feels a sense of protection and being protected. Though he seems irritated to be interrupted by the public sex that goes on there, Erens gives us just that hint of envy in his tone, in his quick shift to listing plants.

There is another half of the story, set in a Buddhist monastery in Vermont. There are plants there too, and order, of course.

From page one, something is building. When Jack breaks under that pressure, he breaks in a big way. It is perfect.

Tin House is reissuing this book this year. Check it out on a cold day.
Posted by Carrie at 10:52 AM No comments:

This Rumpus essay on poetry, presentation and (not just) pie by Kate Lebo is tops.  It made me think about Sylvia Plath, who I've sort of skipped over when looking for idols. Seeing her words interspersed with Lebo's made me want to seek Ariel.

Great interview with Karen Joy Fowler by Carmen Maria Machado: "But mostly I believe that we shouldn’t do things we are unable to look at."

The David Brothers interviews at Inkstuds. There are some audio quality issues with some of these, but, as you know, here at try harder, content is queen.

And, of course, this comic from Anne Emond pretty much sums up this whole season.

The Shining Girls by Lauren Beukes

Oh, Penn Station bookstore, why are you so awful? I wandered around looking for something to buy in paperback and not a thing caught my eye until I saw Lauren Beukes' name popping out from the spine of The Shining Girls. I have been meaning to read her for awhile, so I bought it, hoping for a good escape from reality during a recent Philly trip. 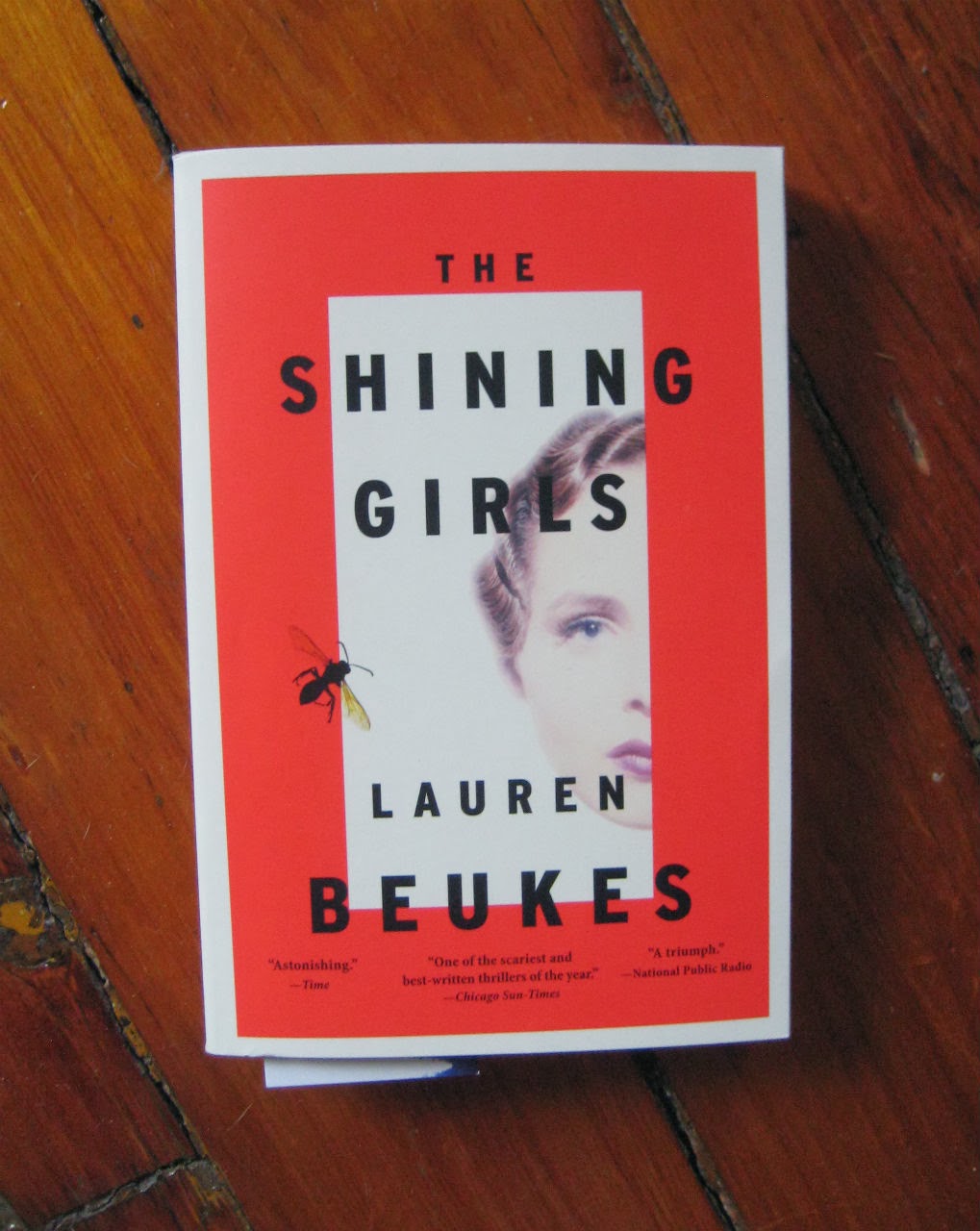 I don't read jacket copy, so when I dove into the story about a time-traveling serial killer I was disappointed to find that it wasn't inspired by The Shining.  Where my supposition came from, who knows, but those two books do have one common theme--an evil house.

When I was a child, I loved to turn off the lights, close my myopic eyes and wander the house I grew up in.  I do the same now. Dreams are stuffed with the houses of relatives and childhood friends. I contain many houses and some of them are traps.

Is the house in The Shining Girls a trap for a certain kind of man or did the house itself come from his desires? Well, hm.

Though the pacing is excellent, The Shining Girls doesn't hold together in the end for a few reasons. The book has a Chicago setting, it really could have been set Major Anycity, U.S.A. and the Chicago-y things that do appear just seem like excuses to show the research that went into them appearing in the first place, as do some of the characters. Is it cool that there is a pre-legal abortion provider's POV included? Yes. But since we only get a little time with each of the victims--with the exception of out final girl, Kirby, who survived a childhood attack by Harper, the killer--the inclusion of that fact about her detracts from the otherwise excellent characterization. There are too many POVs, period. I really appreciate the work it must have taken to give each victim a individual voice and make the violence done to each less about the killer and more about what was taken from the world when each was killed. But we spend too much time with Harper for this to work and the result is distracting. A focus on Harper and the house, just the house, or our final girl, alone or in opposition to either, would have been considerably deeper and more meaningful to me and allowed Beukes's excellent attention to the telling detail to work a longer lasting magic. While I understand that this organization makes the time-travel element easier to follow, it also makes it less weird and, therefore, less interesting.

And now we've come to my major issue with The Shining Girls: The thing that pushes the book from straight horror into SF territory, the time travel element, doesn't feel integral to the plot. Why do these women have to be from different times for the murders to mean something to the killer or to the house? If it were simply a matter of providing a way to escape from the consequences of murdering another person, why aren't there more murders in the book? Harper's dull acceptance of time travel tells us a little about him, but nothing we couldn't learn in another way. When Kirby, who, let's remember, has had her entire life bounded by having been chosen by the house, finally encounters the house and its door to other times, she isn't tempted by the power at all.

Don't get me wrong, I enjoyed reading this book. I wanted to get to the end and stayed up until four in the morning to do so. But the more I thought about the book after that frenzied night, the plot followed through to its end, the less satisfied I became.

Some off-the-top-of-my-head additional reading:
The best: The Haunting of Hill House by Shirley Jackson

A recent evil house story on Pseudopod: The Unfinished Room by Joshua Rex, read by Bob Eccles. (explicit child murder in this one)

An examination of horror tropes with an emphasis on bad houses: Horror 101, heard on Tales to Terrify
Posted by Carrie at 9:34 AM 2 comments: