My favorite part of cons like SPX is the availability of single issues, access to artists and the cool art, prints and doo das that artists bring along. I got a few examples of the aforementioned and, AND, two books, French Milk and The Fart Party by Julia Wertz (to be reviewed later, hopefully sooner than). I was excited for both and disappointed that Lucy was too sick to come to the fest, mostly because I wanted to tell her about my love for the painting I bought from her at MOCCA.

The cover of this book grabbed me right away. A drawn-in Knisley, hanging out the window of a stereotypical Paris apartment, interrupts the dull palette of a rainy-day snapshot. It seemed the perfect image to introduce a book about a young gal in the city of light (and smoke). 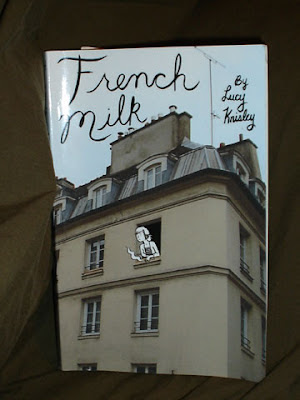 Ostensibly, this is a book about Knisley and her mother’s month-long trip to Paris, where they rent an apartment and sort out their emotions about growing older in between eating, sightseeing and meeting up with friends. This is how Knisley says it in her handwritten intro:
“During January of 2007, my mother and I lived in a small rental apartment in Paris, in order to celebrate my mother’s turning fifty (and my turning twenty-two). The following is the drawn journal which I kept in the course of the trip. The title is in reference, in part, to my love for the fresh, whole milk which I found so different from American processed dairy. It also deals with the valuable and significant influence that we take in from out mothers, as well as my own struggling towards adulthood, at an age when we so desperately cling to our adolescence. With thanks to my mother, for holding the map.”

I was hoping FM would do for mother-daughter relationships what Epileptic did for sibling relationships, that is, expose the shadowy web that binds us to our loved ones in a way that is very hard to describe in mere words. Instead FM was frustratingly superficial and there is nary an indication that Knisley is really thinking about her mother very much during the trip.

The pages are filled with beautiful sketches of meals, the spoils of numerous shopping trips, people and art hat she meets and a few overexposed photos. I loved the art and the paging kept turning for sure, but by the middle I realized that the lists of things bought, things eaten, doubts and friends missed was all there was going to be. I feel like all the mother-daughter stuff was a sales pitch that didn’t pan out. As it ended up, these journal comics are too journally to tell a cohesive story and at the same, spend too many pages giving back-story on things she obviously knows herself, detracting from the energy daily journal comics can sometimes have. For example, early in the book, before the trip to Paris, Knisley meets up with an old “lover” (!giggle! it is hilarious to hear someone under forty use that term seriously) in the East Village named Zan. “Zan and I met in high-school [sic], fell madly in love, fell madly in art, and his presence is associated with all my good adolescence [sic] memories.” This dude, who Knisley seems super excited to tell us was born a girl, gets six pages and we don’t really learn much about him or Lucy. The vague details of their visit and a page of his drawing may have been meaningful for Knisley to have, but as a reader, I don’t care and it comes across as Knisley pimping out her friend’s life to add a little zazz to the section.

I’m sure that given some time to reflect on the trip, Knisley would have been able to use this journal as a source to tell the story she was aiming for and still have it be a document of the beginning of her twenty-second year. I do wonder why no one advised her to do that…

Apparently there will be a revised version of the book out this summer with 30+ new pages. I am definitely going to check it out and I hope the changes are improvements on a not-so-good story from an obviously amazing talent.

PS- her livejournal is here and totally the greatest thing.
Posted by Carrie at 2:35 AM

Hmmm... what I think has happened here is that the reviewer had the wrong idea about what the bok was. It was a travel journal, not a novel.

So, I think the error is in the review, not the book.

Geez, not everything has to be dark! This might come as a shock, but some people have entirely pleasant relationships with their parents.