At the 49th St. Q station I saw one of my old neighbors. The station has finally been cleansed of its terrible smell. Three-quarters of the platform reeked of the fecal matter of big cats—an aging lion maybe, depressed from too many years in a cage—or perhaps a rotting corpse. I once saw a man in that station with such bad necrosis of the legs, his open sores glistening, that asleep, he looked long dead. I wondered if he had somehow deposited his legs in the airshaft between the exits in a final bit of New York magic.

(Since I started writing this the smell and returned and been conquered at least twice. The possibility of its return weighs heavily on me when it has disappeared for a bit.)

My old neighbor used to be one of a matched set. He and his partner reliably wore matching glasses and Mao hats. They both had short grey hair and button noses. They would walk east on 48th St. holding hands. They were probably just going to the grocery store, but they looked like they embarking calmly on an adventure for two. My boyfriend and I liked to spot them on our street looking like septuagenarian hip priests, not saying how they embodied our wish and our fear.

Now, my old neighbor is just an old man—the twosome spell broken. He’s shuffling on a hot platform and looking like he could blow down onto the tracks at any moment. Concern and revulsion and pity are fighting in me, but that’s just because I made this story of him and her and them. I wonder what is downtown. Another adventure, I hope. 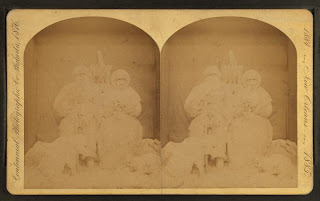