A woman is reading a book about yoga on the subway. She looks very earnest with her Integral Yoga plastic sack, stuffed to the brim with various expensive accoutrements. She is wearing high heels and her straightened hair has the heightened shine of battle. Between stops a twitchy man hops over to her. He is eager to tell her that he does yoga too. He is eager to tell her about getting over things, so, so many wrongs—hearts and dollar signs fly out of his mouth—and then just like that, just a few stops, he is gone out the doors.

She then comes to sit next to me in a two-seat section. She smells faintly of shit.

Skinny arms, ill-fitting clothes, too-big hands and feet, the whole thing. This boy is perfectly poised to break my heart in a moment. He is eleven or twelve and sitting by himself by the window on a medium-crowded train. I can’t look at him without seeing him right on the edge; he’ll either pull himself into the world or get smashed by it. He is looking out into the tunnels mostly, and in his own world totally. When we pull into a station, he looks at the two daffodils in his hands, two different kinds. First he looks at one and then he looks at the other. He has nothing else with him. I almost cry my way up the stairs. This is my problem.

It must be daddy’s day to watch her and behind his sunglasses and be-spangled outfit he is very uncomfortable with the task. Even with so many muscles, it is hard to look tough with a baby. It is hard to bend, over and over to pick up a toy that is not casually dropped. It is hard to be something that you are not. She is so cute, and he, well. I don’t think he has realized the reservoir of goodwill he could garner if he just removed his sunglasses. 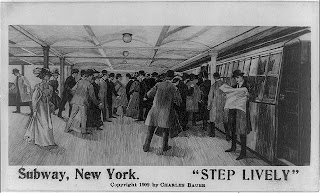