Things You Should Know: A Collection of Stories by A.M. Holmes 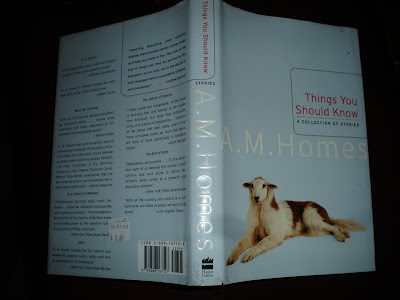 In this book of eleven stories, I liked one, the last in the collection. I’ll choose to tell you about that one, “The Former First Lady and the Football Hero,” a sad and inventive tale about Nancy Reagan and the aging of a marriage.

I always wondered why an actress would give it all up to be married. Of course Ronald Reagan became governor of California and later President, giving Nancy plenty of places to get dressed up and put on a false face, but I think her sacrifice for his image only really became clear after his Alzheimer’s was publicly announced and with him, she retreated from public life. “‘Removed from public view”— that’s how they describe him on his Web site. He was removed from public view in 1988, like a statue or a painting. She will not allow him to be embarrassed, humiliated. She will not allow even the closest of their friends to see him like this. They should remember him not as he is, but as he was. Meanwhile, the two of them are in exile, self-imposed, self-preserving.”

Many, many of the sentences use repetition, which is such a great way to evoke what life with an Alzheimer’s sufferer is like, both because of the routines used to keep the person anchored in time and the mantra of the partner, the reasons to stay, the reasons you still love the person who doesn’t recognize you. In “The Former First Lady and the Football Hero” Nancy deals with her exile with shopping trips, exercise and multiple Internet personalities. Although this last coping mechanism provides some of the story’s excesses, overall, Homes uses Nancy’s web activities to give depth to the character, in the form of fear: fear of her husband’s disease and fear of disappearing herself.

Even though this is a story that peeks behind the “Hollywood magic,” it is still conscious enough of the theatrics of their lives to appeal to readers not feeling so charitable towards the duo. Probably most vicious is the vision of the pompadoured ex-president dressed up like a clown, led by his nurse to shake hands with children in a mall parking lot because “he still gets great pleasure from shaking hands, pressing the flesh.” Or is it the sundown, impromptu minstrel show he decides to provide the nurse and his housekeeper (from “the islands”), covered in shoe polish and lipstick, blabbering on, oblivious to the audience’s shock?

As for the rest of the stories in Things You Should Know, I couldn’t muster a single feeling for any of the characters. It’s too bad. I was prepared to be blown away. Maybe I read the wrong thing by A.M. Homes?
Posted by Carrie at 8:31 PM

your hair's getting long

Carrie, the list of things I should read is getting longer!