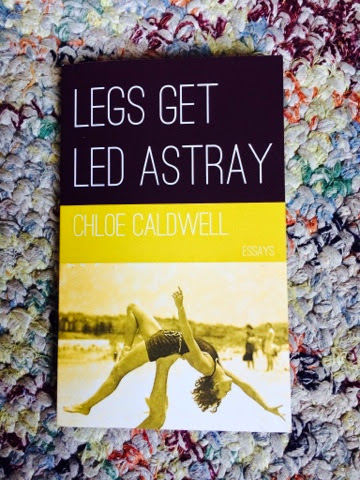 I waited a long time for this book. It was hyped on a few sites I read, blurbed by heroes and published by a great publisher, Future Tense Books.

Most of these essays are about sex and Caldwell's sexuality. I was very excited to read some charged up personal reflections on fucking from a lady. Maybe I've heard these kinds of stories too often, too recently, or maybe I am just too easily bored by glowing depictions of terrible-sounding guys, but this collection did not do a single thing for me.

In the second essay, "The Legendary Luke," Caldwell describes her future home, the setting for much of this writing: "New York City was a fictional place that spring day while we sat alone in our little living room in the woods." The ease of Caldwell's friendships, apartments, lovers, and drug-taking is like a mirror world, a fantasy without any seductive elements. I live here and that skews things, for sure, but all I could think when reading about apartments and roommates and lovers was how flat it all seemed. There are juicy sentences and observations, sure, but not enough reflection on those relationships, objects or moments to make it worth the time to read sentences like: "My lover called me today from a field in Tennessee where he was smoking a cigar and drinking a bottle of absinthe, his typewriter and bicycle in tow." She transcribes notes from lovers and instead of feeling that thrill of secrets not meant to be shared, they read like stories friends of friends tell about high school, peppered with names you never quite catch and later realize don't matter, that are supposed to reflect something about their character. But you don't know them, you have no personal stake in the story, so you don't care. Or, maybe a litany of "Look, I was loved in a cute way!," but, really, who hasn't been, especially by children and disappointing men?


One of the elements of Caldwell's writing that repulsed me was this touch of an "Ain't I a stinker?" attitude regarding sexual conversation and exploits. In an essay on masturbating various places: "Masturbated while writing this piece in the Seattle Library bathroom against the wall. Took me less than forty-five seconds." The essay "The Penis Game"--about a conversation with her three-year-old cousin, Henri, where he is a bit obsessed with both the reality of his own penis and the possibilities of hers--is a banal babysitting story capped with a dirty chat that echoes Chloe and Henri's conversation. From "Yes to Carrots":
I was a guest on your toilet. You are smart; you went to Harvard he tells me, and you probably assumed and maybe even now know that I used that toilet, too. That I slept in your bed. Put your lotion on my hands.

That I sucked your boyfriend's cock religiously.

No, really I believed in it.
This teen-tone undercuts any power of Caldwell's explicitness.

Many instances in the essays overlap and that makes reading in one sitting a bit of a slog. Cutting some (or combining others) might have helped. Read aloud, I imagine some of the shorter pieces could have a hypnotic effect, but felt gimmicky on paper.

Mostly Legs Get Led Astray just made me miss my brother. Her brother is mentioned in almost every essay set in New York:"Older brothers are always doing something more interesting than you (backpacking through Mexico, hitchhiking around Finland, moving to New York City) and they are ruthless about letting you know it." But he is just there, effortlessly, and I can't believe it.
Posted by Carrie at 1:53 PM

Yes, I think you know what I am talking about exactly: Polaroids, typewriter messages, little whispers. UGH.